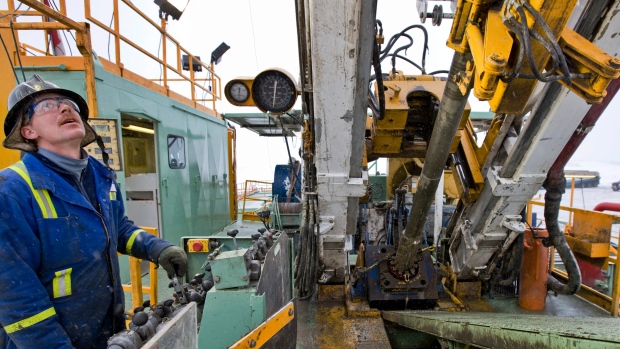 One group of Canadian oil producers is gaining from the output cuts imposed by Alberta: the small explorers.

Local wildcatters that pump light crude far from the giant oil-sands mines of northern Alberta are getting a big price boost from the curtailments announced at the start of December, without the headaches. Many of them are exempt from the cuts and they sell most of their oil locally, so they don’t have to worry about a cross-border pipeline bottleneck.

The Canadian province ordered the output caps, much like OPEC countries, in a desperate move to ease a supply glut that had storage tanks full and not enough pipeline space to export crude to the U.S. For Precision Drilling Ltd., which helps explorers pump light oil, the price boost from the measure means this winter was much busier than expected.

Suddenly one oil company’s “plans for two wells become four wells” and the rig count that was expected to wind down in late January or February -- before the snow melts and the ground softens -- held up longer than expected, said Precision Drilling Chief Executive Officer Kevin Neveu.

“The better realized prices appear to have been a net benefit to most of our customers,” he said. “Total cash flow went up quite a bit.” 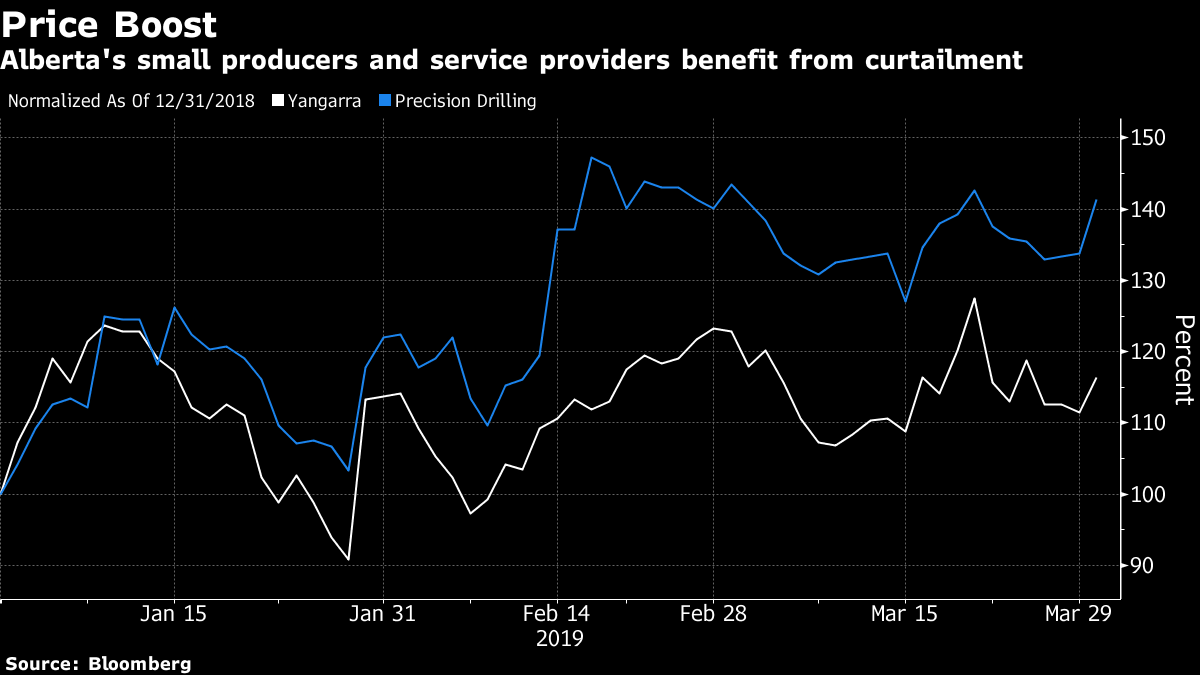 For oil-sands producers, it’s a different story. Though the price for their heavy crude has soared, too, big companies that own refineries, storage facilities and have complex transportation arrangements -- like Suncor Energy Inc. (SU.TO) and Exxon Mobil Corp.’s Imperial Oil Ltd. (IMO.TO) -- criticized the government interference. Their fuel-producing units were actually benefiting from the plunge in local crude prices last year, and they were mostly able to get the pipeline space they needed for their oil or rail contracts.

Now, Canadian heavy crude is so expensive that exports by rail, a more costly alternative to pipelines, have become uneconomic. That contributed to a 3.9 million barrel increase in inventories in February, according to Alberta Energy Regulator data.

In addition to not having to worry about any of those problems, explorers that pump less than 10,000 barrels a day aren’t subject to any curtailment.

Edmonton Mixed Sweet, the light crude they sell at the Hardisty hub in Alberta, has surged to about US$58 a barrel, the highest since early September, from little more than US$20 in mid-November. That’s roughly just US$4 below West Texas Intermediate, the U.S. benchmark.

“Anything outside the oil sands, those guys are definitely happy with where prices are versus where they were,” Michael Kay, Bloomberg Intelligence senior industry analyst, said by phone. Cash flow will increase and, while integrated companies may see their refineries perform worse, it will be outweighed by better returns from upstream, he said.

Shares of Precision Drilling (PD.TO), based in Calgary, have jumped more than 40 per cent in Toronto this year, making it Canada’s best-performing energy stock. Yangarra Resources Ltd., a local oil explorer that expects cash flow to jump as much as 28 per cent to $105 million this year, has seen its shares gain 16 per cent.

“Yangarra moderated the capital program in December but with the Alberta curtailment announcement, Yangarra went back to a ‘normal course,’” said Gurdeep Gill, vice president of business development. “Higher prices are a net benefit as they support a higher capital program.”

Meanwhile, MEG Energy Corp. (MEG.TO), which focuses on mining heavy-crude from the oil sands for U.S. refineries, has sank 30 per cent, the worst performer on the S&P/TSX Energy Index this year.

“Had a very good winter as things go,” Brian Cowan, technical sales representative at Bonnett’s said by phone. “We thought we were going to be slower, but we weren’t.”