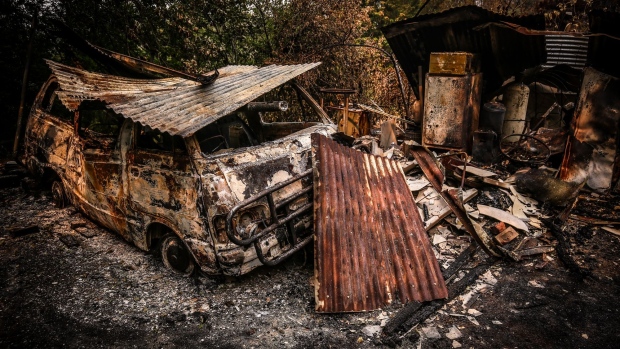 A burned vehicle sits outside a home destroyed by bushfires near the town of Bilpin, New South Wales, Australia, on Sunday, Dec. 29, 2019. With a state of emergency declared in New South Wales state, and toxic smoke shrouding Sydney for several days this month, the spotlight has been turned on Prime Minister Scott Morrison’s conservative government, which champions the coal industry and has dismissed calls to take more steps to curb emissions. Photographer: David Gray/Bloomberg , Bloomberg

(Bloomberg) -- For a fresh perspective on the stories that matter for Australian business and politics, sign up for our new weekly newsletter.

Taking a passive stance on climate change isn’t something Australia’s A$2.9 trillion ($2 trillion) pension industry can get away with for much longer.

After deadly wildfires razed an area the size of England, custodians of the nation’s retirement savings are being asked to take more direct steps to combat global warming. Environmental activists and funds’ own members say the common practice of staying invested in the biggest polluters to exert influence isn’t sufficient, putting firms under mounting pressure to either divest or significantly cut exposure to offending companies.

Outside of Australia, change is happening faster. BlackRock Inc. last month said it would exit debt and equity investments in thermal coal producers across its active portfolios. Europe’s largest pension fund Stichting Pensioenfonds ABP last week pledged that its investments would be climate neutral by 2050, while U.K.’s Brunel Pension Partnership in January threatened to fire managers that fail to curb exposure to climate change and position for a low-carbon economy.

“We’ve seen a spike in Australians connecting the bushfires to climate change, and then to how they’re investing their money,” said Simon O’Connor, chief executive officer of the Responsible Investment Association Australasia. “The onus is on funds to set really strong, quantifiable targets and then demonstrate they’re moving in the direction of meeting those targets.”

The belief is that by staying invested, funds can pressure companies to start changing their practices. There’s also always the threat of voting against company directors at annual meetings if progress isn’t made.

That’s an approach Boston-based money manager State Street Corp. has adopted, recommending board members of firms that have been “consistently under performing” peers in the asset manager’s ESG scoring system not be reinstated.

Among asset managers with at least $10 billion under management, only VicSuper supported all climate-change resolutions during the 2018-19 annual meeting season. Funds including IOOF Holdings Ltd., UniSuper, Retail Employees Superannuation Trust and Equipsuper failed to vote for any resolutions while those including AMP Ltd., First State Super and Sunsuper supported 50% or less.

“Pension funds have been telling us for years they’ve been engaging with investee companies to improve their climate performance,” said William van de Pol, a Melbourne-based asset-management campaigner at environmental lobby group Market Forces. “But we haven’t seen that translate into any strategic shifts that would suggest the major contributors to climate change are actually changing their business models.”

The pressure on pension funds to take more decisive action is mounting. Around 80% of Australians are worried about climate change, with the recent bushfire crisis intensifying concerns, a study last month of 1,033 people by The Australia Institute found.

Retail Employees Superannuation Trust, a fund for retail workers that manages around A$60 billion, is being sued by one of its own members for not adequately assessing the impact of climate change on its holdings. And some 8,100 members of UniSuper, which manages A$85 billion, signed an open letter in January demanding the Melbourne-based fund scrap investments in firms that are expanding their fossil fuel output.

Read More: A 24-Year-Old Is Suing Pension Fund for Not Being Green Enough

The broader finance industry isn’t immune either. Last month, a group of bushfire survivors banded with environment group Friends of the Earth in a legal claim against Australia & New Zealand Banking Group Ltd., accusing the lender of financing the climate crisis through funding for fossil fuel projects, local media reported.

To be sure, pension funds have made some inroads.

BHP Group has pledged to power two of its copper mines in Chile via renewable energy by the middle of the decade as it succumbs to pressure from funds to improve its environmental record. It’s also said to be moving ahead with plans to exit thermal coal production.

Origin Energy Ltd. has spent more than A$800 million in order to source more than one-quarter of its energy-generation mix from renewable energy this year, company disclosures show. AGL Ltd., the nation’s largest owner of coal-fired electricity assets, has created an up to A$3 billion fund to unlock investment in large-scale renewable energy in partnership with Queensland Investment Corp. on behalf of its clients, including Australia’s Future Fund.

The legal requirement for many of Australia’s pension funds to return 3.5% above inflation over a decade is an added complication. Money managers must look after members’ best financial interests and excluding a whole segment of an economy where returns may still be robust can present a challenge.

For example, while BHP and Rio Tinto Group are among the developed world’s most-polluting energy and mining companies when emissions from their customers are taken into account, they’re also among the most profitable, data compiled by Bloomberg show.

“It’s easy to have a slogan,” said Raphael Arndt, the Future Fund’s chief investment officer. “But if someone says ‘Get rid of fossil fuel companies,’ do I sell AGL? That’s also my biggest exposure to renewables.”

Still, funds shouldn’t expect the pressure to let off.

“The presence of natural disasters like bushfires has put sustainability in the spotlight,” said Jessica Melville, the head of strategic advisory, investments for Willis Towers Watson. “We expect this to grow in importance with a significant reallocation of capital likely over the next decade, especially with respect to climate change.”

To contact the editors responsible for this story: Edward Johnson at ejohnson28@bloomberg.net, Katrina Nicholas