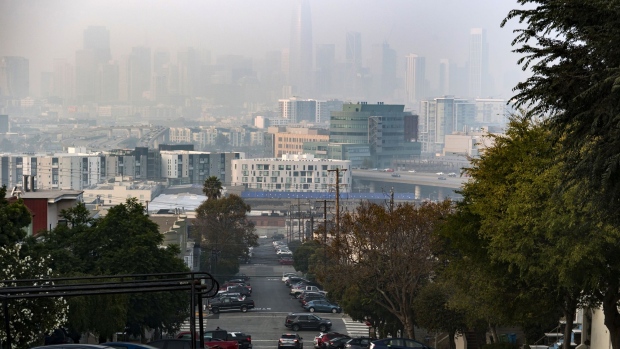 (Bloomberg) -- During the 2018 Camp Fire, which lasted 17 days and killed 85 people, residents of nearby Northern California communities breathed in enough smoke to equal half a pack of cigarettes. Many of the questions being asked then sound eerily familiar today. Should schools close? Who should wear a mask? Then as now, answers from officials often made the situation more confusing, not less.

“Even county to county or community to community, you got very different information on what you should be doing,” says Marshall Burke, a Stanford University professor of earth system science.

The episode prompted Burke and several of his Stanford colleagues to ask what, exactly, local governments and forestry agencies should be telling the public about how to protect themselves from smoke during a wildfire. That’s trickier than it sounds. “Overall, we know smoke is bad—no one believes that breathing smoke is good,” Burke says. “But how bad is it, and who is most affected?” Estimates vary dramatically as to how much pollution fires generate. Complicating matters further, making a recommendation requires predicting where that pollution will go, a calculation that typically relies on complex air-movement models and weather analyses that introduce still more uncertainty.

The Stanford team set out to simplify both processes. Their approach—published Monday as a working paper by the National Bureau of Economic Research—starts with analyzing satellite records to see how past fires and their smoke have spread, then combines that data with regular on-the-ground air-monitor readings of fine particle pollution (called PM 2.5, for particulate matter smaller than 2.5 millionths of a meter) to generate hyper-specific air quality estimates.

Applying their method generated some surprising results. As wildfires become more frequent due to climate change, the researchers found, the increasing amounts of smoke may harm Americans nearly as much as rising temperatures. “That’s crazy, right?” Burke says. “We hadn’t even though of that as a key part of the climate impact in this country.”

Katelyn O’Dell, a PhD candidate in Colorado State University’s Department of Atmospheric Science, says that year over year changes in wildfire smoke makes defining the relationship between fires and health a challenge, and that additional research is needed to determine the chronic, long-term effects of exposure to smoke from wildfires. “I generally agree with the research and policy recommendations made by the authors,” she says.

The researchers attribute the increasing health risks from fires to a century of poor forest management, which has caused brush to pile up and gives today’s fires plenty of ready fuel. They also blame rising heat and subsequent drying of plant matter due to climate change, and an influx of people moving into high fire risk areas.

About 49 million people in the U.S. live near forests, a number that grows by 350,000 every year. Many of these forest-adjacent communities have largely White populations, and as a result, the researchers found, rural White communities are exposed to more fine particulate matter from wildfires than areas with largely Black populations. In general, Black communities suffer disproportionate harm from poor air quality compared to White ones, a central driver of the fight for environmental justice.

Historically, the U.S. has treated PM2.5 as a local problem, but that approach is increasingly “at odds” with reality, according to the paper. And the disconnect will only get bigger as the frequency of wildfires grows.

To make air-pollution laws more relevant for the coming gush of wildfire smoke, the authors suggest that policymakers need scientists to give them a more granular understanding of how wildfires become a public health threat. The federal government currently exempts some states from including smoke from wildfires in their tallies of PM2.5 pollution. Whether that should change constitutes a “key policy question” lawmakers have yet to face.