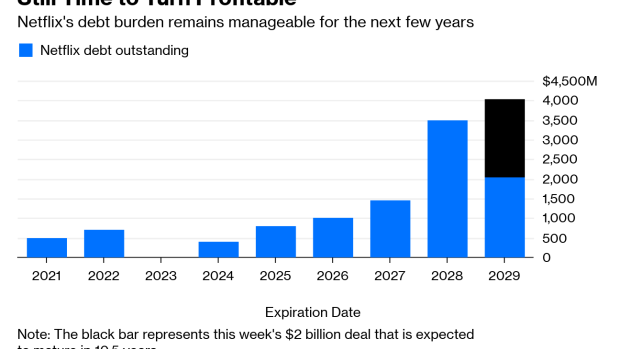 (Bloomberg Opinion) -- By now, tapping the debt markets is nothing new for Netflix Inc. Just as it did in October, the streaming giant plans to issue $2 billion of junk-rated bonds denominated in dollars and euros. It has borrowed at least once a year since 2013 in an effort to build up a huge library of shows that gives subscribers a reason to renew month after month.

What is new, though, is the level of competition bearing down on Netflix from behemoths like Apple Inc., AT&T Inc. and Walt Disney Co. Bond investors ought to take the escalating content war seriously when placing orders for this new deal. After all, it could throw a wrench into the company’s timeline for turning cash-flow positive.

Netflix, as usual, will use the bond proceeds for general corporate purposes including investments in content, production and development, according to a company statement. Just last week, Chief Executive Officer Reed Hastings declared on a call after the company’s first-quarter results that “our message to debt investors is you better get in soon, because it’s not going to be that much more to go.” Effectively, the sort of cash burn that Netflix has been known for will be a thing of the past. That’s the sort of promise that helped the company win upgrades last year from Moody’s Investors Service and S&P Global Ratings.

It’s nice to imagine Netflix as a profitable, self-funding company. And it seems likely that could happen “over time,” as Chief Financial Officer Spencer Neumann said. In the more immediate future, however, it’s hard to see how it can afford to coast when the competition has never been greater, and especially after a quarter in which it fell short of analysts’ estimates for new subscribers. My Bloomberg Opinion colleagues Shira Ovide and Tara Lachapelle have extensively chronicled the fight over content. Netflix’s share of the pie is far from guaranteed, though Moody’s expects it “will be a foundation” streaming video service in a sea of choices.

Whether that means it will need to keep coming back to the junk-bond market in the years ahead remains to be seen, but it certainly seems more likely than Hastings appears to suggest. Moody’s leans on the word “gradually” in its report when discussing expectations for deleveraging — it projects the company can break even on cash flow by 2023, which somehow feels both close and far away. Stephen Flynn at Bloomberg Intelligence estimates Netflix will issue more debt in 2020. The company expects to improve its cash flow starting next year, but that’s a low bar considering it recently boosted its 2019 cash-burn forecast to $3.5 billion.

That’s a lot for bond investors to consider. Then again, it might not matter given the state of the high-yield market. The Bloomberg Barclays U.S. Corporate High Yield Bond Index has rallied a staggering 8.4 percent already in 2019, with the average spread to Treasuries at about the same level as when the company last borrowed in October. The benchmark 10-year yield, meanwhile, has tumbled 50 basis points since then. It’s possible that Netflix could see its lowest borrowing costs since 2017.

Still, it doesn’t seem worth it to chase yields much lower than that, and especially not for fear of a Netflix bond shortage. The company’s own 10-Q seems to confirm debt sales are still part of the plan: “We expect to continue to significantly increase our investments in global streaming content, particularly in original content, which will impact our liquidity and result in future negative net cash provided by (used in) operating activities and free cash flows for many years.”

There’s a very real risk that Netflix’s projections don’t pan out. Anyone can say that about any company, of course, but it feels especially true at this time for the on-demand video streaming industry. Netflix can go ahead and tell bond investors it won’t need them forever, but it looks likely it’ll still need them for a long time if it wants to win the content war.