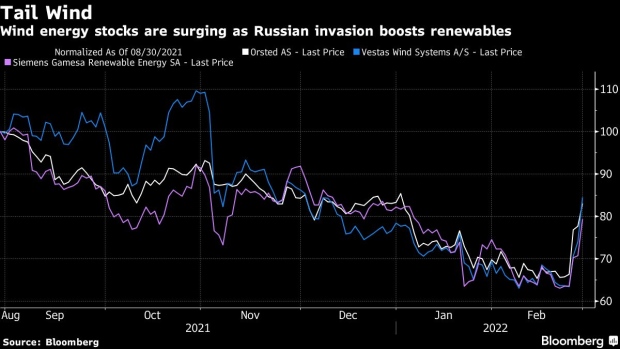 Wind turbines on the coast of Perekop Bay, which connects to the Black Sea, near the Crimea border in the Kalanchatski region of Kherson Oblast, Ukraine, on Wednesday, Jan. 19, 2022. President Joe Biden said Russia will "pay a heavy price" if any of its forces move across the border into Ukraine after earlier suggesting Western allies might struggle to react to a small-scale attack. , Bloomberg

The world’s biggest wind-turbine maker Vestas Wind Systems A/S gained 15% Monday, while competitor Siemens Gamesa Renewable Energy SA was up 12% and Nordex SE rose as much as 20%. Denmark’s Orsted A/S, the world’s biggest developer of offshore wind farms, gained as much as 9.7%.

“There’s a realization that Europe has to move away from dependency on Russian oil and gas and one way to achieve that is renewables,” said Deepa Venkateswaran, a senior analyst at Bernstein Autonomous LLP. “Now it’s not just about decarbonization, but also about security of supply ”

The Russia-Ukraine war may serve to hasten the European Union’s ambitious plans to boost the share of its energy from renewable sources this decade. With projects still stifled by local red-tape, executives for the biggest turbine makers wrote to European Commission President Ursula von der Leyen last week to urge the EU to take action to speed up the permitting process for new wind farms.

While Europe will likely continue to rely on natural gas for years to come, more renewables will lessen the bloc’s dependence on the fuel. That could make it easier to source its gas from countries besides Russia, which currently makes up more than a third of Europe’s supply.

The gains in renewable energy stocks Monday stood in stark contrast to firms heavily exposed to Russian fossil fuels. Austrian oil and chemicals group OMV AG fell 8% while Uniper SE, which helped finance the new Nord Stream 2 gas pipeline from Russia that may never be used, dropped as much as 9.5%.