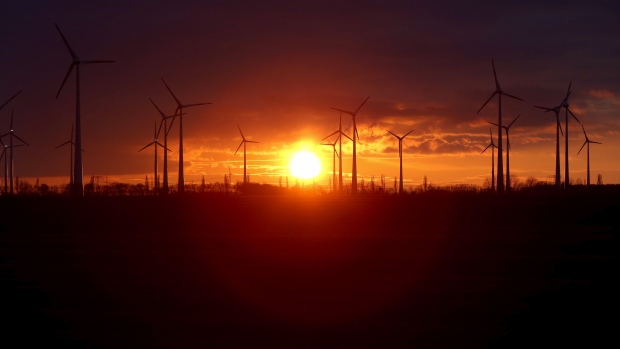 Wind turbines at a wind farm during sunset in Nauen Brandenburg, Germany, on Wednesday, Dec. 30, 2020. It was a pivotal year in the transition toward renewable energy, underpinned by massive government spending pledges and corporations working to burnish their environmental, social and governance credentials. Photographer: Liesa Johannssen-Koppitz/Bloomberg , Bloomberg

(Bloomberg) -- Wind power made up 15% of Europe’s total electricity generation in 2020, its highest-ever contribution to the region’s energy mix, according to a report by consultants Enappsys Ltd.

The growing reliance on turbines, exposes the problem of maintaining enough backup capacity to meet demand when the wind isn’t blowing. Without sufficient energy storage, power prices are vulnerable to volatility.

“Amid the global drive to move to cleaner electricity sources, many European countries see wind farms as an increasingly vital component of the overall power mix,” Enappsys director Jean-Paul Harreman said. “This trend was seen very starkly in the 2020 data and is likely to become more pronounced in the next few years.”

In a year that saw massive drops in power demand early on with coronavirus-related lockdowns, overall generation levels dropped 3% year-on-year. Still, renewable generation -- including biomass and waste contributed 41% to the total output. Wind increased its share of the total mix by 4% in 2020.

While renewables continue to grow, gas-fired generation remains a staple of electricity production with its share rising slightly. Output has almost doubled since 2015 overtaking coal this year for the first time.