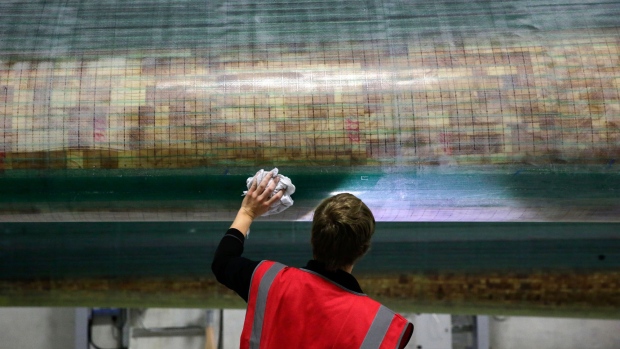 An employee performs quality control checks on a constructed wind turbine blade before it is painted at the Siemens AG turbine blade plant in Hull, U.K., on Thursday, Oct. 6, 2016. Ports like Grimsby and Hull are within 12 hours sailing time of about 22 gigawatts of built and planned wind farm capacity in the North Sea. , Bloomberg

(Bloomberg) -- One of the world’s largest makers of wind turbines cut its outlook for the year as supply-chain snarls boosted raw material costs.

Siemens Gamesa Renewable Energy now expects margins that won’t exceed 1% and could even be negative this year, the company said in a statement after the market closed. It also reported a loss of 309 million euros ($350 million) for the first quarter of its 2022 fiscal year.

Turbine makers are grappling with rising commodity costs and pandemic-related disruptions to supply chains. A rally that’s boosted the cost of energy and the price of metals such as steel and copper are squeezing profits for Siemens Gamesa and its rivals.

“Performance was negatively impacted by supply chain related disruptions, which are now expected to last longer than previously anticipated,” the company said. That has “resulted in higher than expected cost inflation, mainly affecting our wind turbine segment,” according to the statement.

Siemens Gamesa now expects its margin on earnings before interest and tax and before other costs to be between -4% and 1%. That’s down from a previous expectation of 1% to 4%.

The company also said it’s facing difficulties scaling up one of its new turbine models, known as the 5.X platform. Volatile markets have also impacted investment decisions by some of its customers, resulting in project delays.

Still, the turbine maker maintained its long-term plan to achieve margins of 8% to 10%. It didn’t say when it expects to meet that goal.