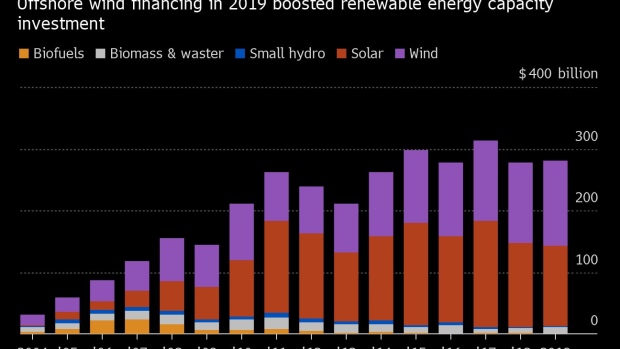 (Bloomberg) -- A few renewable energy technologies are bracing for rapid growth, breaking away from stagnation in investment across the whole industry last year.

A BloombergNEF report that counted $282.2 billion in funding for clean energy technologies in 2019, up just 1% from the year before, suggested electric cars, offshore wind farms and energy storage devices will enjoy the biggest gains.

That growth will probably drive higher investment in clean energy capacity as governments clamp down on greenhouse gas emissions and investors become alert to expanding opportunities in green industries. Below are just some of the predictions that BNEF analysts expect for 2020 and beyond.

Wind power is likely to break new ground, bolstered by a 25% increase in installations on land to 69 gigawatts last year. More turbines in the U.S., China, Sweden, Norway and Spain will compensate for a slight dip in offshore developments. That should drive higher investment, said Tom Harries, a BNEF wind analyst.

Falling costs for renewables is driving up installations and will also boost the energy-storage business this year, according to Logan Goldie-Scot at BNEF in San Francisco. More than $5 billion of renewables-plus-storage deals will be announced this year, the researcher said. The U.S. in particular has been leading solar units with storage systems attached, thanks to favorable government policies. While Europe has historically lagged on those combinations, BNEF expects the number and size of deals to increase over the next 12 months.

Oversupply in the world’s liquefied natural gas market will continue in 2020, albeit a bit less acute than the glut that built up in 2019. Global imports rose 13% last year, adding an extra 40 million metric tons a year to demand of the cleanest fossil fuel. The vast majority of that supply wound up in Europe, where gas is the fuel of choice for heating in many countries. LNG imports will expand by 20 million metric tons in 2020, with Europe and Asia taking the lion’s share, said Maggie Kuang, BNEF’s lead analyst on the fuel.

By this time next year, there will be 10 million electric vehicles driving on the world’s roads, up from 1 million just five years ago, according to Colin McKerracher, head of advanced transport at BNEF. Year on year growth will reach 20%, and although China will still dominate sales, Europe will close the gap. There are signs that as government incentives end, some markets will see slower growth. This year, it’s the internal combustion engine market that’s apt to contract, BNEF says.

--With assistance from William Mathis.