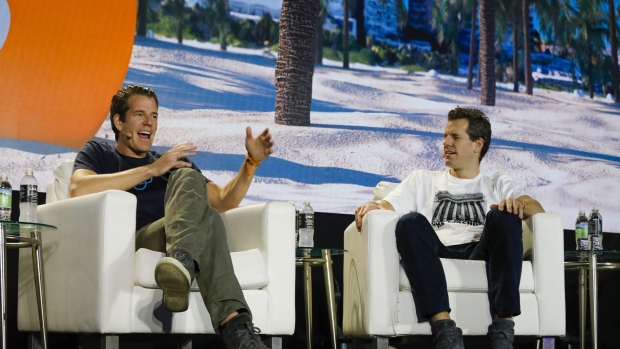 Tyler Winklevoss, chief executive officer and co-founder of Gemini Trust Co., left, and Cameron Winklevoss, president and co-founder of Gemini Trust Co., speak during the Bitcoin 2021 conference in Miami, Florida, U.S., on Friday, June 4, 2021. The biggest Bitcoin event in the world brings a sold-out crowd of 12,000 attendees and thousands more to Miami for a two-day conference. , Bloomberg

(Bloomberg) -- The Winklevoss twins defeated a claim by the former chief operating officer of their Gemini crypto exchange, who accused them of illegally firing him for blowing the whistle on improper transactions.

An arbitrator rejected Benjamin Small’s claims that he was acting as a whistle-blower and said he was properly fired in 2017 for being “grossly negligent” in his duties, resulting in millions of dollars in losses to Winklevoss Capital Management -- Cameron and Tyler Winklevoss’s family office that invests in startups like Gemini.

Small and his lawyers didn’t immediately respond to requests for comment on the arbitration decision, which was submitted for New York court approval on Thursday.

In his Jan. 12 decision, arbitrator Mark Segall noted that Small had a prior track record as a whistle-blower. He was awarded a $1.5 million bounty after complaints about certain activities at his former employer Credit Suisse Securities resulted in a $5 million fine to the Securities and Exchange Commission. Small settled whistle-blower claims with another former employer, IEX, for $491,500.

Small claimed that he was fired after he told the Winklevosses that several Bitcoin loans provided by a WCM affiliate were improper. The arbitrator found there was no evidence that was the case, pointing out that all of the loans were repaid and that regulators were aware of the transactions but raised no concerns.

Segall said phone records also didn’t back up Small’s claims that he called the twins to discuss the loans. Small later changed this story to say he communicated with Cameron Winklevoss using WhatsApp, but the arbitrator noted that was problematic as well.

“Cameron Winklevoss testified that he does not use WhatsApp because it is subject to Facebook’s control,” Segall said. The twins famously sued Mark Zuckerberg, chief executive officer of Facebook, now named Meta, claiming that he stole their idea for the social network.

The Winklevoss brothers denied Small’s claims and said he was fired for giving unauthorized trading-fee rebates to several customers, including Cardano Singapore PTE Ltd. and Hashtech LLC, leading to $11.5 million in losses for Gemini.

While the Winklevoss brothers were aware of discounted rates and had an interest in increasing volumes, they claimed they made clear they weren’t willing to tolerate continued losses, per a court document. Small authorized the rebates in violation of Gemini’s policy that required another executive’s approval of fee overrides.

The Winklevosses drove in from vacation to suspend Small, and he was ultimately fired in December 2017.

Small joined Gemini in 2015 as a software engineer with a base salary of $220,000 plus equity. Within a few months, he was promoted to head of market structure, where he was responsible for organizing and structuring Gemini’s marketplace, including reviewing terms of certain trading-fee rebates. He got a salary bump, along with an additional 0.25% equity in the company. By the end of 2016, he was promoted to chief operating officer of digital asset services, which was set up to facilitate Gemini’s work with regulators to establish a Bitcoin exchange-traded fund -- an effort that ultimately was rejected by the SEC. In April of 2017, he was appointed chief operating officer of Gemini.

Since his firing, Small spent about a year as chief technology officer at Genesis Global Trading Inc., according to his LinkedIn profile. He is currently listed as London-based co-founder of ThreatKey Inc., an enterprise security company.

Gemini has $129 billion in lifetime trading volume, per the filings. In November, Gemini raised $400 million in a round of funding that valued the company at $7.1 billion.