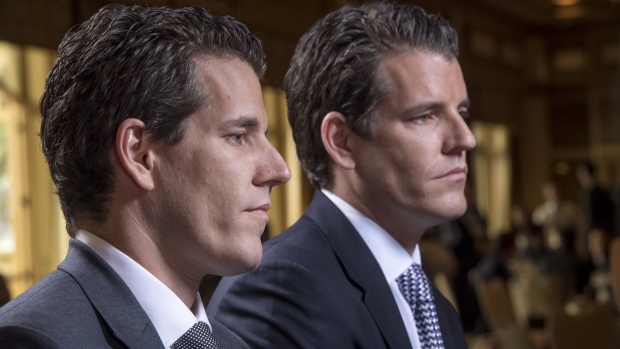 Tyler and Cameron Winklevoss, whose fortunes have been on a roller coaster since they jostled with fellow student Mark Zuckerberg at Harvard University more than a decade ago, are once again billionaires thanks to a surge in the price of Bitcoin.

The twins bought US$11 million worth of Bitcoins in 2013, according to the New York Times, and soon became evangelists, creating crypto exchange Gemini Trust Co. The 39-year-old brothers, who gained widespread fame following the release of the 2010 movie “The Social Network,” briefly became billionaires in 2017 when Bitcoin soared to a record before the volatile currency plummeted.

Bitcoin has more than doubled this year to US$15,433, partly driven by fears that massive central bank easing and fiscal stimulus will debase currencies. Each of the twins is worth about US$1 billion, according to the Bloomberg Billionaires Index. They also own other cryptocurrencies including Ether.

The Winklevoss brothers declined to comment on their wealth through a spokeswoman.

Cryptocurrencies have increasingly gained the backing of established firms. Square Inc. last month said it invested about US$50 million in Bitcoin, while MicroStrategy Inc.’s Michael Saylor cited the Federal Reserve’s recent actions as helping convince him to put the lion’s share of the software firm’s cash into the cryptocurrency. Fidelity Investments in August disclosed it was starting a passively managed fund for wealthy investors, and hedge fund manager Paul Tudor Jones has said it’s useful as an inflationary hedge.

“The price of Bitcoin is being driven by all of the money printing and uncertainty in the world right now,” Tyler Winklevoss, who is Gemini’s chief executive officer, said in a statement.

Still, cryptocurrencies remain niche, risky and highly volatile. Warren Buffett famously referred to Bitcoin as “rat poison squared” several years ago, and hasn’t changed that view, arguing that cryptocurrencies have no value. Their ownership tends to be highly concentrated, and so-called whales have sway over prices.

“I’m not a huge fan of cryptocurrencies,” Ken Griffin said during an event last month for the Robin Hood Foundation. The Citadel founder expressed concern about some of its “nefarious uses,” the lack of demand for such currencies from sovereigns, and the importance of the U.S. dollar and its simplicity.

The Winklevoss brothers continue to deepen their involvement in crypto. The U.K.’s Financial Conduct Authority recently approved their application for an electronic-money license, paving the way for the expansion of Gemini into the U.K. market.

In an August essay, the twins said they expect Bitcoin’s price to reach US$500,000.