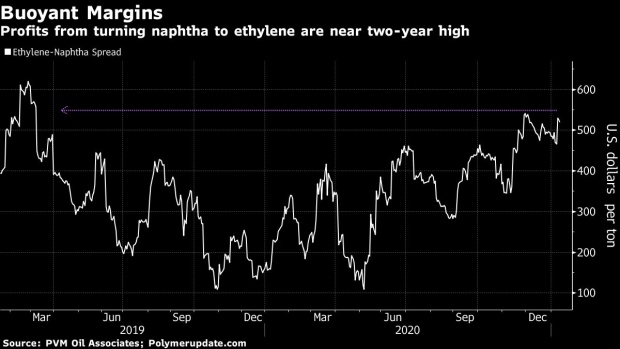 (Bloomberg) -- The cold snap across Asia is exacerbating a squeeze in the supply of feedstock for the region’s plastic producers just as demand climbs with the return of some of the biggest processing plants after shutdowns.

Demand for naphtha -- refined into the building blocks of petrochemicals used to make everything from medical masks to car interiors -- is surging as three South Korean operations resume following prolonged closures, according to traders and analysts. Processors can typically utilize some propane to supplement naphtha when supply is tight, but greater demand for heating fuels during winter is making that alternative more expensive.

The growing appetite for naphtha is feeding through to prices in Asia, with the bullish backwardation structure at the widest in six months and the cost jumping for some supplies set to be delivered in the second half of February.

The South Korean operations account for about 16% of North Asian naphtha demand outside of China and are expected to be all back online by the end of this month. Lotte Chemical Corp. and LG Chem Ltd. shuttered units due to fire, while Yeochun NCC Co. has been conducting planned work.

Known as crackers, the naphtha processors get most imports from the Middle East and India. Some companies such as South Korea’s SK Innovation Co. and Taiwan’s Formosa Petrochemicals Corp. have both cracking and refining units and produce a portion of their own naphtha needs. However, the coronavirus outbreak has led to a reduction in processing rates and forced the likes of SK and Formosa to tap the market for more naphtha supply than usual.

“This is a demand-led rally on the back of lower refinery supply,” said Armaan Ashraf, a Singapore-based analyst at industry consultant FGE. The Asian market will likely need to import over 2.4 million tons a month of naphtha from West of Suez from February to April to meet demand, compared with about 1.7 million in January and about 2 million a month in 2020, he added.

Tighter supply is starting to be reflected in physical prices. Lotte Chemical last week purchased light naphtha for delivery in the second half of February at a premium of $20 to $21 a ton to Japanese benchmark prices. That compares with similar cargoes bought at a discount for delivery last month.

There’s an incentive for crackers to pay higher prices for their feedstock, with profits from converting naphtha into ethylene near the highest level in two years due to demand for packaging and medical equipment.

A similar story is playing out in Europe, which regularly exports to Asia. Reduced refinery runs are cutting supplies of light virgin naphtha and the region’s steam crackers are also favoring burning naphtha over other feedstock, said Ciaran Tyler, an analyst at Energy Aspects Ltd. As a result, Europe’s naphtha market is sharply backwardated and the fuel now -- unusually -- costs more than Brent crude.

As for propane, that’s not expected to become an attractive prospect for crackers until at least the second quarter as the winter chill extends into the new year, according to FGE.