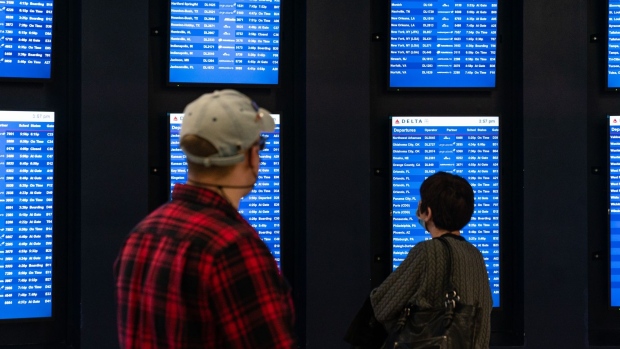 (Bloomberg) -- Thousands of U.S. flight cancellations cascaded into the first workday of the new year as ongoing Covid-19 issues among airline workers were compounded by winter storms hitting the northeast.

More than 1,930 flights were canceled as of 9 a.m. New York time on Monday, according to data tracker FlightAware.com, adding to the nearly 5,360 grounded since 2022 began. Airports in the northeastern U.S. led cancellations as a winter storm with heavy snow and gusty winds spread from the mid-Atlantic, according to the National Weather Service.

Airports in the Washington and New York areas led those with grounded flights on a day when federal offices were shuttered in the nation’s capital.

The weather-related troubles built on delays that began before the Christmas holiday, with nearly 17,000 flights parked in the U.S. since Christmas Eve, according to FlightAware. More than 65,000 have been delayed during the period, snarling efforts to get home by passengers who visited family or took vacations.

Illness among airline workers linked to the fast-spreading omicron variant has contributing to cancellations. JetBlue Airways Corp. cited a surge in sick calls linked to the virus as a factor in its decision last week to pare 1,280 flights from its schedule between Dec. 30 and Jan. 18.

“We expect the number of Covid cases in the northeast –- where most of our crew members are based –- to continue to surge for the next week or two,” the airline said Monday in a statement. “This means there is a high likelihood of additional cancellations until case counts start to come down.”

Delays persisted even in areas where winter storms have moved on, with Southwest saying extreme cold in Denver requires extra safety protocols for employees working outside, contributing to delays and some cancellations. The Dallas-based airline led canceled flights Monday morning, dropping 440, or 12% of its total, according to FlightAware data.

JetBlue, which is using managers to fill some jobs, grounded 136 flights Monday, or 13%, while SkyWest Inc. canceled 235, or 10%, and Republic Airways Holdings Inc. 131, or 12%. SkyWest and Republic ferry passengers on smaller aircraft to airport hubs for major airlines.