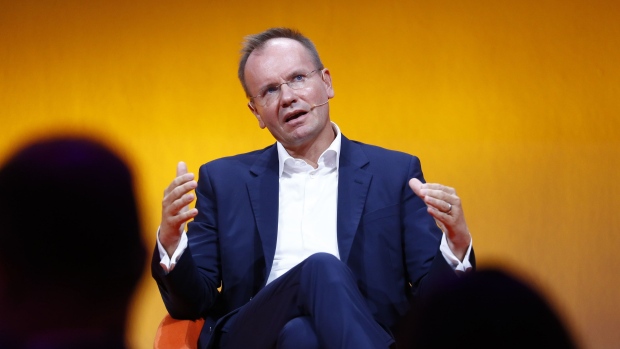 Markus Braun, chief executive officer of Wirecard AG, speaks at the Handelsblatt Banking Summit in Frankfurt, Germany, on Wednesday, Sept. 4, 2019. Deutsche Bank AG Chief Executive Officer Christian Sewing said that the banks most radical revamp in years is set to deliver higher returns for investors, even as it grapples with the prospect of lower interest rates and a slumping German economy. , Photographer: Bloomberg

(Bloomberg Opinion) -- Less than a month ago, Wirecard AG told investors that it expected an “unqualified audit opinion” when its long-delayed annual results were finally published. The update that the German electronic-payments processor provided to the market on Wednesday was about as far from unqualified as it’s possible to imagine.

Auditor Ernst & Young has been unable to obtain enough information to verify 1.9 billion euros ($2.1 billion) of the company’s cash balances, according to the Wirecard statement. Furthermore, there’s evidence that a third party tried to “deceive” the auditor. The annual report still hasn’t been published and, unless that’s quickly resolved, creditors might terminate 2 billion euros of loans to the company.

The shares lost about two-thirds of their already beaten-down value. Since their peak in 2018, when Wirecard replaced Commerzbank AG in Germany’s blue-chip Dax index, about 20 billion euros of shareholder wealth has gone up in smoke. The market capitalization is now just 4.4 billion euros.

These events cap a devastating fall from a grace for a business that investors hoped would repair Germany’s reputation for being a laggard in IT and technology, and restore the pride of its diminished finance sector. The Wirecard case is also a lesson in the dangers of group think: Financial analysts, directors, regulators and auditors were for too long unwilling to listen to important questions about how it made money.

The company has for months been engaged in a war of words with the Financial Times newspaper and short sellers, who queried its accounting practices and the role of third parties used by Wirecard in countries where it lacked a license to operate.

For outsiders not privy to internal documents, the complexity and opacity of Wirecard’s business made it difficult to pass judgment. Nevertheless, the FT’s reporting raised sufficient doubts to warrant further investigation. Police in Singapore launched a probe.

And yet, German prosecutors chose to investigate an FT journalist, and Wirecard’s regulator Bafin temporarily banned investors from shorting the stock last year. Instead of demonstrating diligence, Germany tried to shoot the messenger.

Analysts were also too willing to take the company at its word. Mirabaud Securities’ Neil Campling was a rare voice that doubted Wirecard’s business and technology. In contrast, another analyst accused the FT of publishing “fake news” (the bank where they worked subsequently backtracked). Another said they hadn’t read the full conclusions of a recent special audit by KPMG because they were in German. Before today, Ernst & Young had signed off on Wirecard’s accounting for more than a decade.

When a stock is heavily shorted, as Wirecard’s was, it’s incumbent on directors to ask why. But in this case, the board appears to have been in thrall to the chief executive officer, Markus Braun, who has defied calls from some investors to resign. He said on Wednesday that it was still unclear whether fraudulent transactions had occurred.

The company’s defenses began to unravel last month when KPMG was unable to verify sales and profits booked via third-party partners. Wirecard’s apparent mischaracterization of those findings appears to have spurred German regulators into action. Its offices were raided earlier this month.

Trust and the appearance of propriety are vitally important for the payments industry, and after today Wirecard is now severely lacking in both. The FT journalist who pursued the story endured personal attacks on social media, but his instincts appear to have been correct. For years Germany took a lenient approach to regulating its banks and suffered the consequences. It has made the same mistake with a fintech.