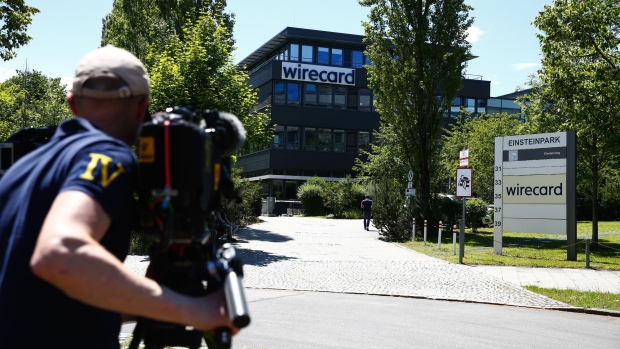 A television news camera operator films outside the Wirecard AG headquarters during a police and prosecutors raid in Munich, Germany, on Wednesday, July 1, 2020. Wirecard offices in Germany and two locations in Austria were raided by Munich prosecutors looking into the 1.9 billion euros ($2.1 billion) that went missing from the fintech company’s accounts. , Bloomberg

(Bloomberg) -- The Wirecard AG scandal could spark a revamp of how the European Union carries out financial supervision, top official Valdis Dombrovskis told the Financial Times.

The German tech company’s collapse shows that previous attempts to bolster financial watchdogs in Brussels were a “missed opportunity” and need another push, according to Dombrovskis, the European Commission’s executive vice-president for economic policy.

“We are looking at how we can strengthen the system to avoid that kind of situation happening again,” he said in an FT report published Sunday. The EU is also considering stronger regulations for audit committees, Dombrovskis said.

When Wirecard filed for insolvency in June after 1.9 billion euros ($2.2 billion) of cash went missing, the scandal breached “all three lines of defence” meant to protect EU investors, Dombrovskis said: regulations and corporate governance, auditors, and supervision from public authorities.

Dombrovskis told the FT that efforts he led to revamp the European Securities and Markets Association in 2017, as well as its sister agencies, were watered down by national governments.