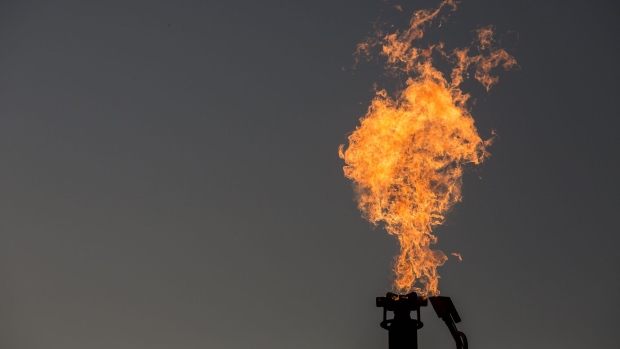 A gas flare is seen in a field at dusk near Pecos, Texas, U.S., on Saturday, Aug. 31, 2019. Natural gas futures headed for the longest streak of declines in more than seven years as U.S. shale production outruns demand and inflates stockpiles. Photographer: Bronte Wittpenn/Bloomberg , Bloomberg

(Bloomberg) -- Wisconsin is investigating a methane plume that was spotted by a satellite last week.

The state launched a probe after being contacted by Bloomberg News about a plume of methane detected in southwest Wisconsin by Kayrros SAS, which relied on a Sept. 10 satellite observation from the European Space Agency. The geoanalytics company estimated an emissions rate of 30 tons of methane an hour was needed to generate the release.

“The DNR was made aware of a potential methane plume in Southwest Wisconsin, and commenced investigations immediately,” spokeswoman Molly Meister said in an email Friday.  “No reports of planned or unplanned work or releases by regulated sources in the area of the plume have been identified by DNR thus far.”

Halting intentional releases and accidental leaks of methane, the primary component of natural gas, could do more to slow climate change than almost any other single measure. The U.S. And the European Union this week unveiled a new initiative to pare global methane emissions by 30% before the end of the decade. Methane has more than 80 times the warming impact of carbon dioxide over the short term.

Like many other states, Wisconsin has no methane reporting requirements, and often such releases are never reported or are under-reported to the U.S. Environmental Protection Agency.

This year, Energy Transfer LP and Gazprom PJSC confirmed emissions in the U.S. and Russia after Bloomberg News reported plumes spotted from satellites.