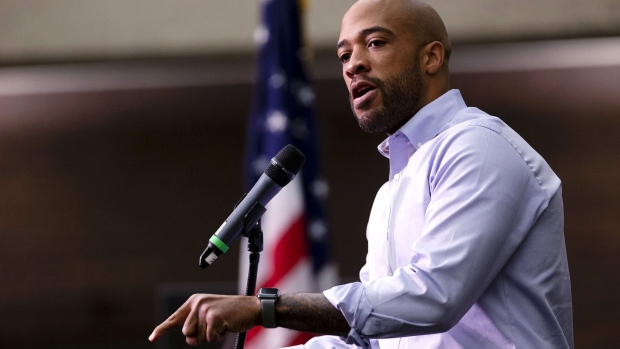 The U.S. Capitol building in Washington, D.C., U.S., on Saturday, Dec. 18, 2021. The White House acknowledged that the $2 trillion economic proposal likely would not clear Congress this year, meaning that 2021 ends without a major accomplishment on social and climate policy. Photographer: Samuel Corum/Bloomberg , Bloomberg

(Bloomberg) -- Wisconsin voters on Tuesday are set to formalize Democrat Mandela Barnes and Republican Senator Ron Johnson as the contenders in a pivotal general election battle that will help decide control of the Senate for the next two years.

The nominations of Barnes, the state’s lieutenant governor, and Johnson, who is seeking a third term, in their party primaries is a foregone conclusion, and both candidates have already been training their attacks on each other in anticipation of the November general election.

Johnson has only a nominal challenge in the Republican contest and Democrats have coalesced behind Barnes in recent weeks as other contenders dropped out.

“The consolidation gives Democrats a bit of a head start,” Jessica Taylor, Senate editor of the nonpartisan Cook Political Report, said, “but this was always going to be one of the marquee races and it remains a toss-up for now.”

Wisconsin is one of five states -- along with Pennsylvania, Georgia, Nevada, and Arizona -- that will determine whether Democrats hold or expand their narrow control of the 50-50 Senate or whether Republicans take back the majority. Johnson is considered the most vulnerable GOP incumbent.

The race also may have implications for the 2024 presidential election. The highly competitive swing state was won by Republican former President Donald Trump by less than a percentage point in 2016 and by Democratic President Joe Biden Wisconsin by a similar margin. Both parties will be looking to the Senate contest as a bellwether.

Primaries also are being held Tuesday in Minnesota, Connecticut and Vermont, but none have races with the wider implications of the Wisconsin Senate contest.

Candidates and outside groups have reserved $126 million for advertising in the Wisconsin campaign so far, according to the ad tracking firm AdImpact, highlighting the stakes of the contest.

While Johnson is vulnerable, Democrats face a challenge in ousting him. Voters broadly are laying the blame for decades-high inflation on Biden and Democrats. And inflation spread across Wisconsin cities more broadly that any other US state in the first quarter of 2022, according to Moody’s Analytics estimates shared with Bloomberg.

Abortion may be a wild card factor. There are signs that Democratic voters have been energized since the Supreme Court in June overturned the Roe v Wade decision that legalized abortion nationwide. Anti-abortion groups in Wisconsin, meanwhile, are pushing for enforcement of a state law that’s been on the books since 1849 banning the procedure except to save the life of the mother.

In Barnes and Johnson, voters will choose between ideological polar opposites.

Johnson, 67, the founder of a plastic-sheeting company, has been endorsed by Trump and he largely backed the former president’s agenda, including the 2017 tax-cut measure and the former president’s use of an emergency declaration to build a wall at the US border with Mexico. But he’s also irked McConnell, threatening in 2017 to blow up the GOP drive to repeal Obamacare as he sought deep long-term cuts to Medicaid and denouncing last year’s bipartisan infrastructure bill.

Barnes has been endorsed by Senators Elizabeth Warren and Bernie Sanders, both leading progressives, and Johnson has cast him as too liberal for the Midwestern state.

“Socialist policies have produced this mess & a radical left senator from Wisconsin is not the solution,” Johnson said in a recent tweet.

A Milwaukee native, Barnes, 35, supports middle-class tax cuts and higher taxes for the wealthy, Medicare for All, Democrats’ “Green New Deal,” restoring federal abortion protections and ending the legislative filibuster. But he has also campaigned heavily in rural areas of the state, issuing a farm plan that would crack down on “Big Ag monopolies.”

He would be Wisconsin’s first Black senator. He was elected as lieutenant governor in 2019 on the same ticket as Governor Tony Evers, who is up for re-election this year. He served for four years in the Wisconsin state legislature before making an unsuccessful bid for a state Senate seat in 2016.