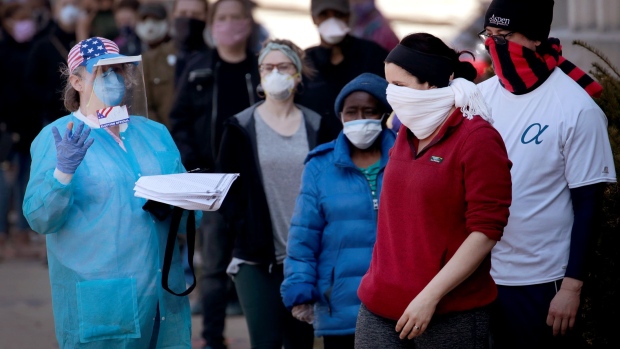 MILWAUKEE, WISCONSIN - APRIL 07: A polling official instructs voters waiting in line outside of a polling place at Riverside University High School on April 07, 2020 in Milwaukee, Wisconsin. Voters waited in line about two hours at the school, one of the few polling places open in the city after most were consolidated due to a shortage of poll workers fearful of contracting COVID-19. (Photo by Scott Olson/Getty Images) , Photographer: Scott Olson/Getty Images

(Bloomberg) -- Wisconsin proceeded with its primary on Tuesday and voters defied stay-at-home orders to wait as long as two hours to cast ballots in the first state to hold an in-person election since the coronavirus pandemic sent Americans into their homes.

At least a dozen states postponed primaries or switched to voting by mail since the outbreak, but Wisconsin moved ahead after Republicans blocked several legal challenges by Democratic Governor Tony Evers to delay the election and barred officials from keeping absentee balloting open for a week.

Voting rights experts say the changes effectively disenfranchised thousands of voters who didn’t want to risk contagion at polling places and sought absentee ballots after Evers ordered Wisconsinites to stay at home in a state that had 2,440 cases and 84 deaths as of Monday.

With many poll workers choosing to skip the election, some towns and cities in Wisconsin drastically cut the number of polling places, while Evers called out the National Guard to help balloting. Each voter received his or her own pen to mark ballots and “I voted” stickers were eliminated.

Milwaukee had five polling places open instead of more than 180 that are normally open.

Patrick S. Tomlinson, a science fiction author who lives in Milwaukee, spotted a long line at the Riverside University High School polling station in Milwaukee Tuesday morning. He said it took 10 minutes to walk from the front to the end of the line, in part because voters were keeping the recommended six feet apart from one another.

“It was massive,” he said. “I’ve been voting in every election since moving to Milwaukee eight and a half years ago, and I’ve never seen anything like it.”

Erik Forkin, 23, a software developer in Madison, said that about half of the poll workers at his voting place in a senior center weren’t wearing masks or protective gear.

“That seems problematic when they’re dealing with hundreds of people,” he said.

Andrew Hitt, head of the Wisconsin Republican Party, blamed municipalities for the lines at some polling places.

“Cities that have long waiting times to vote could have opened a sufficient number of locations to prevent long lines,” he said. “Local elected officials and election planners need to answer to their constituents as to why they’ve chosen not to use resources at their disposal when the vast majority of polling locations across the state are running smoothly.”

Milwaukee county clerk George Christenson said he was still upset that the election was being held at all, saying it was putting voters’ lives at risk.

“This election is being conducted as safely as possible, but there is no 100% guarantee that people will not be affected or harmed health-wise,” he said.

Former Vice President Joe Biden, who is on the Democratic ballot in Wisconsin and is expected to win the state handily against Bernie Sanders, said last week that voting in the election should be safe, though he thinks the Democratic National Convention this summer in Milwaukee might need to be held virtually.

“A convention having tens of thousands of people in one arena is very different than having people walk into a polling booth with accurate spacing with six to 10 feet apart, one at a time going in, and having the machines scrubbed down,” he said.

President Donald Trump urged voters to “get out and vote” for an incumbent state Supreme Court justice, despite holding daily briefings at the White House in which he and government public health leaders have discussed the virus’s dangers.

“Wisconsin, get out and vote NOW for Justice Daniel Kelly. Protect your 2nd Amendment!” he tweeted.

The state court, voting 4-2, agreed with Republicans who had argued that the governor lacked the authority to change the date of the election.

The ruling came hours after Evers issued an executive order suspending the in-person voting on Tuesday and asking the legislature to postpone it until June 9 or a date of their choosing.

In a separate blow to Evers on Monday, the U.S. Supreme Court reinstated a deadline for mailing absentee ballots in the primary.

The justices required that all absentee ballots be postmarked by Tuesday, rejecting a district court judge’s decision last week that extended absentee balloting by a week to April 13. That had led to multiple lawsuits, with the state and national GOP seeking to stop the judge’s order with the last-minute request to the U.S. Supreme Court.

The high court divided along ideological lines, with the five Republican appointees in the majority. In an unsigned opinion, they said the district judge’s order would “fundamentally alter the nature of the election by allowing voting for six additional days after the election.” The court’s four Democratic appointees dissented, saying the rights of tens of thousands of people would be affected.