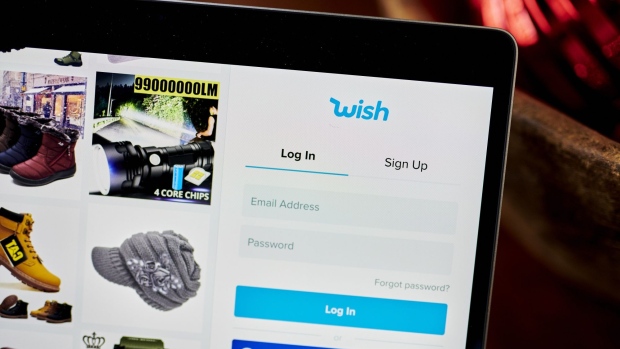 Wish website home screen on a laptop computer arranged in Little Falls, New Jersey, U.S., on Wednesday, Dec. 9, 2020. Online retailer Wish filed to raise as much as $1.1 billion in a initial public offering that will add to the billions of dollars sought this month by consumer technology companies on U.S. exchanges. Photographer: Gabby Jones/Bloomberg , Bloomberg

Online retailer Wish fell 16 per cent in its trading debut Wednesday, in a more muted start to life as a public company than for DoorDash Inc. and Airbnb Inc. last week.

Shares of Wish opened at US$22.75 apiece, below the US$24 they were sold for in its initial public offering at the top of a marketed range. The shares closed at US$20.05, giving the company a value of at roughly US$14 billion on a fully diluted basis, which includes options and restricted stock units as well as the outstanding shares listed in its filings.

The offering, the 31st on a U.S. exchange to exceed US$1 billion this year, follows last week’s blockbuster trading debuts by DoorDash and Airbnb. DoorDash soared 86 per cent after its US$3.14 billion offering, while Airbnb closed its first day up 113 per cent after a US$3.83 billion IPO including so-called greenshoe shares.

“We are focused on getting the right value and getting the right investors on board to really allow us to pursue our long-term vision,” Peter Szulczewski, chief executive officer of Wish parent ContextLogic Inc., said in an interview before trading started.

Shares of both DoorDash and Airbnb have fallen this week, which may have been a factor in the lukewarm reception for Wish, said Kathleen Smith, principal and manager of IPO exchange traded funds at Renaissance Capital. Smith said the performance of last week’s listings “teaches investors a lesson” about buying at the open.

For More: Wish, the Online Dollar Store, Is Losing Momentum Before IPO

Wish is also part of a competitive landscape. While e-commerce stocks have traded well this year, some investors compare Wish to Amazon.con Inc., which Smith said has a similar growth rate. “If I can own Amazon, why should I own Wish?” she added.

Only 16 of the 82 IPOs raising US$500 million or more this year on U.S. exchanges fell on their first day of trading, according to data compiled by Bloomberg. The last to do so was Chinese financial services platform Lufax Holding Ltd. on Oct. 30.

At its IPO price, Wish trades at about four times its projected 2022 sales, according to a person familiar with the matter. Amazon trades at 3.6 times its 2021 sales estimates, according to data compiled by Bloomberg. EBay Inc. trades at 3.37 times the same metric. A representative for Wish declined to comment.

Wish board member Hans Tung, a managing partner at GGV Capital, said he isn’t worried about competition with Amazon. “I made my living as a venture capitalist who bet on being anti-Amazon,” he said.

Tung said he also wasn’t concerned about the the first day of trading. He noted that Peloton Interactive Inc., in which he was also an investor, fell in its debut last year and is now trading at more than four times its IPO price. GGV isn’t selling any shares in Wish, he said. Tung compared Wish to Pinduoduo Inc., the Chinese e-commerce company that has risen 665 per cent since its 2018 U.S. debut. The strong stock market performance of brick-and-mortar chains Dollar General Corp. and Dollar Tree Inc. show the potential for the niche, he said.

Online lender Upstart Holdings Inc. rose 47 per cent in its trading debut Wednesday after pricing its IPO at the bottom of a marketed range to raise US$240 million. More than US$22 billion has now been raised in IPOs on U.S. exchanges in December -- a record for the month. The 2020 total is now more than US$174 billion, also an all-time high, the data show.

Wish differentiates from other online retailers by focusing on value conscious consumers, according to its filings.

Founded in 2010 by Szulczewski and Danny Zhang, who met at the University of Waterloo in Ontario, Canada, Wish connects sellers to potential buyers of everything from clothing to electronic goods and kitchenware. ContextLogic owns other online marketplaces, including Geek, Mama, Home and Cute, according to the Wish website.

Wish’s parent company, San Francisco-based ContextLogic, sold 46 million shares Tuesday for US$24 each, raising US$1.1 billion. The offering was led by Goldman Sachs Group Inc., JPMorgan Chase & Co. and Bank of America Corp. The shares trade on the Nasdaq Global Select Market under the symbol WISH.