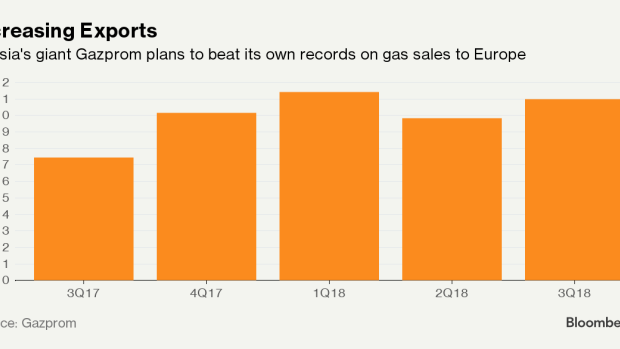 (Bloomberg) -- European natural gas prices look set to fall for the first time in four years in 2019 as buyers keep a close eye on flows from Russia that reached a record last year.

With a healthy amount of fuel in storage after a mild start to this winter, the outlook is bearish. That’s being exacerbated by an expected increase in imports, which would help offset declining production in the region. While Russia intends to maintain its grip on about 40 percent of the European market, fluctuations in that dependency will be closely monitored.

“The question is how much gas Russia ends up delivering into the European markets -- that will be a key determinant,” said Murray Douglas, research director for European gas at Wood Mackenzie Ltd. “Russia expressed publicly it wants to keep deliveries. That could generate a real collapse in prices in the summer months, when we will see a big LNG supply.”

The Dutch next-month gas contract is expected to end 2019 at 22 euros a megawatt-hour ($7.35 a million British thermal units), according to the median of seven analysts surveyed by Bloomberg. That’s a bit below the average of 22.28 euros during 2018 and well below the peak for the year of more than 29 euros. Dutch Gas Price

Kremlin-backed energy giant Gazprom PJSC reported a record 201 billion cubic meters of natural gas exports to Europe in 2018 and plans to maintain those volumes into 2020. Exports were up 2 percent in the year through Dec. 15.There’s questions whether Russia will be able to follow through on that ambition later in the year when a flood of liquefied natural gas is set to enter European markets. Europe’s LNG imports are expected to increase by 14 percent to 56 billion cubic meters, according to Morgan Stanley, after achieving records over the past month. Russia could follow the initial plan focusing on its market share, or it could decide to protect prices, putting the brakes on exports.

“Russia’s strategy will always have a big influence in the natural gas market,” said Vattenfall AB’s head of gas trading, Guy Smith. “I have the impression that we will always see Russian gas flowing to Europe. The question is how much. We will probably see an increase on exports from Russia, or at least the same level of exports.”

Europe is an easy destination for spare LNG cargoes thanks to its numerous terminals, liquid trading hubs and a sophisticated transportation network. And global production of the super-chilled fuel is on the rise.

Russia’s Novatek PJSC is ramping up production from its third production line at its Yamal plant in the Arctic. In the U.S., Cheniere Energy Inc. began output from its second plant, Corpus Christi, and started a fifth unit at its Sabine Pass export facility.  Wood Mackenzie says a record amount of capacity is set to start this year, boosting LNG’s importance in global gas markets.

Not only the rise of LNG volumes, but also more flexible contracts that allow cargoes to go to the highest priced destinations, is turning trading into a more active business and increasing the market liquidity, according to John Twomey, who leads Bloomberg NEF’s European power and natural gas analysis team.

“A huge wave of LNG in Europe is pushing the natural gas market,” said Twomey. “The willingness of the U.S. to sign deals that are not destination-defined are also reframing the market.”

Gazprom in Moscow and the Kiev-based natural gas company NJSC Naftogaz Ukrainy have argued for years over transit fees linked to a 2009 gas-shipment contract that expires this year. Gazprom aims to cut its dependence on Ukraine, which transports almost half of Russian flows into western Europe. Its plan is to build new export pipelines through the Baltic and the Black Seas by the end of this year -- including the controversial Nord Stream 2 link.

WeatherAlthough the general expectation is for a mild winter, which would damp gas demand, there is still a risk that there will be a cold snap at the end of the heating season. A rare weather event known as sudden stratospheric warming is possible by the end of February, according to Vattenfall’s Smith. That could see a repetition of last February’s “beast from the east,” a high pressure area, which drew cold air from Siberia across Europe and helped boost gas prices to a record.

Carbon and CoalCarbon is expected to extend a rally that saw its price more than triple last year. That makes natural gas more competitive against dirtier coal in power generation.

--With assistance from Anna Shiryaevskaya and Mathew Carr.

To contact the author of this story: Vanessa Dezem in Frankfurt at vdezem@bloomberg.net

To contact the editor responsible for this story: Reed Landberg at landberg@bloomberg.net, Rob Verdonck