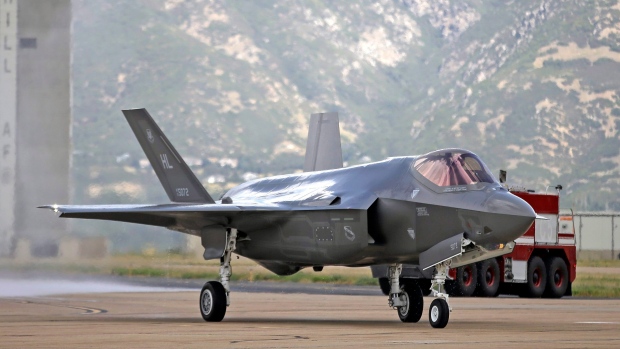 An F-35 jet arrives at it new operational base Lockheed Martin , The Canadian Press

That would mark a reversal in Lockheed's (LMT.N) fortunes after Liberal leader Justin Trudeau campaigned in 2015 on a promise not to buy the firm's F-35 stealth fighter.

Trudeau's government on Tuesday scrapped plans to buy 18 Boeing Super Hornets and made clear the company would not win a contract for 88 jets unless it dropped a trade challenge against Canadian planemaker Bombardier Inc (BBDb.TO).

Government officials estimate the cost of the jets at between $15 billion and $19 billion and say it is the biggest investment in the air force in 30 years.

Last week Boeing issued a statement making clear it would not back down in its fight against Bombardier, which it accuses of trying to dump airliners on the U.S. market.

The firm may not even launch a bid for the 88 jets, the first of which are due to be delivered in 2025.

That leaves the F-35, a new aircraft, up against two European rivals which first flew in the 1990s: the Eurofighter Typhoon and Dassault Aviation SA's Rafale.

"The longer this process plays out, the narrower the government's options become, and the prospects for a European jet become even dimmer," said one defence source, who declined to be identified given the sensitivity of the situation.

A second defence source said Boeing now had little chance of winning the 88-plane contract and noted Canada's air force had long sought an American jet so it could operate easily with the U.S. military.

Neither source works for a company which might make a bid.

Lockheed Martin said in a statement it was confident the F-35 was superior to older competitors.

Boeing spokesman Scott Day described the Super Hornet as "the low-risk, low-cost approach" which could serve Canada's needs well into the future.

Canada is part of the nine-nation consortium that helped fund development of the F-35, which has been hit by years of delays and cost overruns.

Trudeau initially opposed the F-35 on the grounds that it was too costly but Ottawa has since softened its line. Officials insist the competition will be open and say no company will be excluded.

Yet in a clear swipe at Boeing, federal ministers on Tuesday said any bidder deemed to have harmed Canada's economy would be at a distinct disadvantage.

"Can Canada get away with this? The answer is probably ... when procurement for the military is involved, governments have wide latitude," U.S. trade expert Bill Perry said by email.

Boeing accuses Bombardier of imitating Airbus by trying to muscle into the U.S. market. People familiar with Boeing say the strategic importance of defending its core passenger jet business outweighs the fighter dispute.

Jerry Dias, president of the Unifor union, said in a phone interview he did not think Boeing would react by cutting jobs. Unifor represents 1,300 workers at a Boeing plant in Winnipeg.