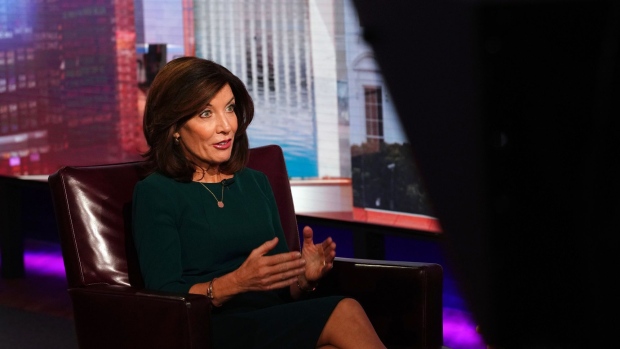 (Bloomberg) -- Rising from legislative intern to lieutenant governor, Kathy Hochul is on the precipice of becoming the first woman to lead New York as Governor Andrew Cuomo faces the prospect of impeachment.

Hochul, a 62-year-old Democrat that few envisioned ascending to the governor’s mansion, would take over for Cuomo should he resign or be impeached: A Tuesday report by state Attorney General Letitia James found he sexually harassed 11 women. Cuomo has denied the findings, but politicians including President Joe Biden, U.S. House Speaker Nancy Pelosi and dozens of former New York allies have urged him to quit.

Hochul said Tuesday that the attorney general’s report documented “repulsive” behavior, and that she believed the women who accused Cuomo of harassing them.

“No one is above the law. Under the New York Constitution, the Assembly will now determine the next steps,” Hochul wrote in a statement posted on Twitter. “Because Lieutenant Governors stand next in the line of succession, it would not be appropriate to comment further on the process at this moment.”

The Buffalo-born former congresswoman would be the first governor from outside New York City and its suburbs in a century, and the first upstater since Nathan L. Miller of Cortland County was elected in 1920. Her record reflects the conservatism of her district, but she would oversee a state whose economy and politics are driven by New York City, a complex and parochial liberal hotbed.

”I’m quite sure we can work together,” said New York City Mayor Bill de Blasio, who since the early months of his administration has been feuding with Cuomo. “She strikes me as a reasonable person.”

Email and telephone messages left for Hochul Wednesday were not immediately returned.

New York’s lieutenant governor officially serves as president of the state Senate, and fills in as governor when the incumbent is absent. Elected in 2014, Hochul appeared at Cuomo’s side for major announcements, particularly those focused on women’s rights, but didn’t participate in his popular Covid briefings last year. His book about the pandemic, now part of a potential impeachment, doesn’t mention her.

Hochul, who chairs New York’s Regional Economic Development Councils, instead toured the 62 counties to promote his handling of the pandemic, reprising a frequent role as a traveling saleswoman for state policies.

Despite Hochul’s long career, she remains an unknown to most New Yorkers. More than two-thirds of registered voters had never heard of her or didn’t know enough to form an opinion, according to a Siena College poll released in April. Her name is pronounced like “local,” with an H.

Hochul holds an undergraduate degree from Syracuse University and a law degree from Catholic University. She began her legal career in Washington working in private practice, entering politics an aide to Representative John LaFalce and then to Senator Daniel Patrick Moynihan.

She returned to her native region for her political apprenticeship. Hochul was a Hamburg Town Council member for 14 years, and then Erie County clerk from 2007 to 2011. She served in the U.S. House from 2011 to 2013 and became lieutenant governor in 2015, running on a ticket with Cuomo -- a choice that helped attract upstate votes.

“She wants to be the governor for the entire state of New York, from New York City to Buffalo, urban and rural,” said Jeremy Zellner, the Erie County Democratic Committee chair, who’s worked on many of Hochul’s campaigns. “She knows the state -- every region of the state.”

Former Erie County clerk David Swarts met Hochul 40 years ago, when she was a college intern at the Assembly and he was an assistant to the speaker. He said she was the kind of person “who says, ‘Throw it to me and I’ll get it done,’” an impression decades of working together hasn’t changed.

Before becoming Cuomo’s No. 2, Hochul carved out a moderate profile befitting the conservative area she represented. During her term in Congress, she voted to repeal environmental limits on polluters and won an endorsement from the National Rifle Association. She also opposed allowing undocumented immigrants to get drivers’ licenses, although she has since reversed that position.

“Her willingness to shift politically does not suggest she would offer any kind of independent judgment,” the New York Times editorial board wrote about her in 2014. “Nor does her record give any real clue about what would happen if she took over as governor.”

Hochul was Cuomo’s second lieutenant governor. She joined the ticket after Cuomo’s first lieutenant, Robert Duffy, didn’t seek re-election after one term. She wasn’t commonly mentioned as a successor to Cuomo and was listed 19th in an annual ranking of Albany’s most powerful people by City & State in June, rising from 65th last year.

Still, she has more cash on hand for the 2022 election than some of Cuomo’s more commonly mentioned replacements. She raised more than $500,000 in the first half of this year, bringing her total coffers to $1.7 million. James, who ranked first on the City & State list, has $100,000 less.

Cuomo and Hochul were never close. When New York City Public Advocate Jumaane Williams challenged her in 2018, Cuomo suggested she should consider running for her old seat in Congress. She declined.

After Cuomo first faced harassment allegations, she often omitted his name from speeches.

Hochul’s husband, Bill Hochul, was U.S. attorney for the Western District of New York from 2010 to 2016 under President Barack Obama. He’s now general counsel for Delaware North, a closely held operator of food and beverage concessions at sports stadiums and casinos. The couple has two children.

Hochul wouldn’t be the first lieutenant governor to assume New York’s top job. In March 2008, then-Governor Eliot Spitzer resigned after just 14 months amid a prostitution scandal. David Paterson replaced him and served nearly three years. After an ethics scandal of his own, Paterson chose not to run for election in 2010.

If Cuomo resigns or is impeached, Hochul would join eight other female governors. She would have through 2022 to lead the state as it reckons with a budget shortfall, variants of Covid-19 and the pandemic’s economic fallout.

While Hochul hasn’t spoken publicly about her future political plans, she told Politico in October that she hopes to stay in public life well into her 80s.