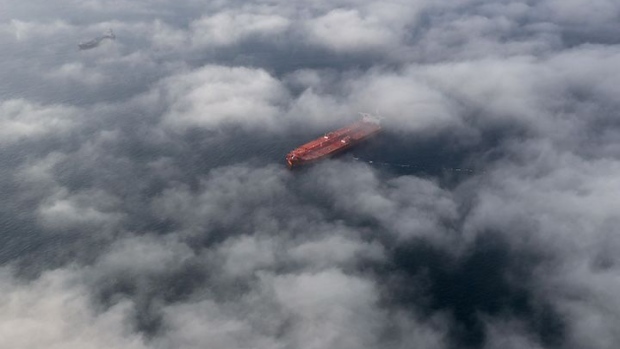 LONG BEACH, CALIFORNIA - APRIL 28: An aerial view of an oil tanker anchored near the ports of Long Beach and Los Angeles amid the coronavirus pandemic on April 28, 2020 off the coast of Long Beach, California. Around three dozen oil tankers are currently anchored off the California coast as the spread of COVID-19 impacts global demand for crude oil. (Photo by Mario Tama/Getty Images) , Photographer: Mario Tama/Getty Images North America

(Bloomberg) -- Diesel traders are diverting cargoes of the fuel away from the European Union with just days to go until the bloc bans almost all imports from top supplier Russia.

Four vessels hauling about 2.9 million barrels of diesel-type fuel updated their destinations to New York in recent weeks, having previously signaled ports in northwest Europe, according to information from Vortexa Ltd. and separate tanker-tracking data compiled by Bloomberg.

The movements suggest that, despite the impending collapse in Russian cargo deliveries to the EU, the US may have an even more acute supply situation. Freezing weather halted more than a third of Texas Gulf Coast oil-refining capacity late last year and a key fuel pipeline to New York Harbour was also recently closed.

A fifth, the Zoilo, also recently loaded at least some diesel in the Dutch port of Amsterdam and is currently signaling Florida.

See also: Where Will Europe Get Its Diesel From in 23 Days’ Time?

Overall supplies of diesel-type fuel in northwest Europe have been supported by rising stockpiles in the Amsterdam-Rotterdam-Antwerp oil trading hub — but these inventories are still below the seasonal norm.

“Europe was well supplied for diesel in December unlike the US Atlantic Coast,” said Pamela Munger, a senior market analyst at Vortexa.

European Union sanctions mean the bloc will soon lose almost all seaborne deliveries of diesel from Russia, which even this month is on course to be the single biggest external supplier.

Other tankers hauling oil products are bypassing Europe altogether and sailing straight for the US.

The Captain Paris and STI Osceola both loaded in the Middle East and are now sailing across the Atlantic, signaling arrival in the US later this month.