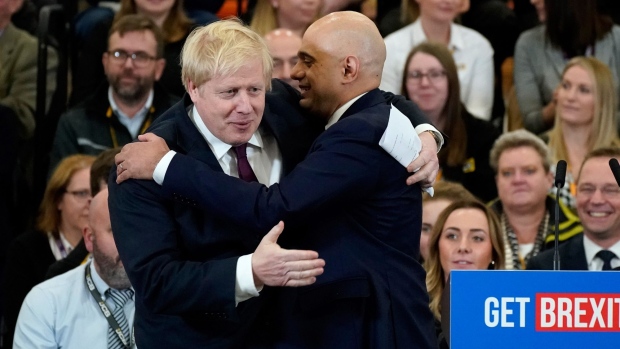 (Bloomberg Opinion) -- Sajid Javid’s resignation as Britain’s Chancellor of the Exchequer doesn’t so much signal a major shift in Britain’s economic policy as confirm a sea change in the rules of British politics under Boris Johnson’s administration. That could be just as consequential.

With the country’s first post-Brexit budget due in less than a month and major trade decisions underway, this would seem an odd time to put the country’s budget in a new pair of hands. It certainly wasn’t expected. While there was talk of a “Valentine’s Day massacre” for some weeks after the election, the chancellor’s job wasn’t one of those slated to change in this reshuffle; indeed he was the only cabinet minister whom Johnson had publicly promised would keep his job.

The prime minister just didn’t promise to make staying tenable. Javid apparently lost a long-running battle to keep control over his team of special advisers (known as spads in Britain). These officials are very important — and usually very loyal — to cabinet ministers, but it seems the prime minister’s office now wants to centralize their appointments. Javid’s advisers became pawns in a bigger contest for control, a word this government rather likes.

There are two big conclusions to draw from the change of hands at No. 11 Downing Street, the Chancellor’s official residence. The first — reinforced by the overall cabinet reshuffle — is that the center of power in the British government is Boris Johnson and his own chief adviser and strategist Dominic Cummings. They intend to maintain an iron grip on message discipline.

It was Cummings who fired Javid’s media adviser Sonia Khan in August, without his knowledge. In a warning to any other advisers with their own ideas, Khan was escorted out of No. 10 by a police officer. Cummings has also issued strict instructions to advisers and cabinet officials about contact with the media.

The second conclusion is that Britain’s purse strings probably just got even looser. Javid, an admirer of Margaret Thatcher, had already gone a long way to accommodating Johnson’s big-spending plans; rewriting Britain’s fiscal rules to allow the government to take advantage of low interest rates and to increase borrowing for investment. The new rules commit the government to balancing the budget and limiting investment spending to 3% of gross domestic product, up from 2% before. He also pledged that debt would be lower at the end of the five-year parliamentary term, rather than at the end of this year, as promised previously.

But that didn’t mean the fiscally conservative chancellor was happy to sign off on an all-around spending bonanza. Cabinet ministers were told to axe at least 5% of their budgets, targeting any program that doesn’t impact health, crime-fighting or regional inequalities. In recent weeks, there were reports of tension between the chancellor’s office and Cummings over spending.

Javid’s replacement, Rishi Sunak, will have less control over his advisory team. He may also have a harder time standing up to No. 10 than Javid, a Tory big beast with his own base in the party.

Educated at the elite Winchester School, Oxford and then Stanford University (he also has Goldman Sachs on his resume), Sunak arrives at the job with every elite credential apart from experience in such a huge job. Both former Tory Prime Minister John Major and Labour politician Alistair Darling also became chancellor having served as Chief Secretary to the Treasury, Sunak’s last job, but each of them moved onto other major cabinet roles first. This is quite a promotion for the 39-year-old member of Parliament.

Sunak has risen so far so fast that most Britons won’t have heard of him before a few months ago. Back in June, he and two other lawmakers wrote an article in the Times newspaper backing Johnson as Conservative Party leader. Javid was running for the job then too, along with other now-forgotten candidates.

“Boris Johnson is one of life’s optimists and can help us recapture a sense of excitement and hope about what we Conservatives can do for Britain,” they wrote. Johnson, they argued, is a “one nation” Conservative like them, best placed not only to deliver Brexit but to unite the country. The Sunak piece arguably marked a point at which Johnson’s leadership bid become unstoppable.

During the general election campaign, Sunak stood in for Johnson in TV debates. His calm demeanor and knack for sticking doggedly to the government’s message saw him tipped for a big move in the cabinet reshuffle as early as December — and even as a future prime minister. Since the election, Sunak seems to have had more media appearances than other ministers combined, and was put in charge of the government’s first public spending review.

If the government’s lavish spending plans and reports of wealth taxes haven’t unnerved traditional conservatives already, a tamed Treasury will. David Gauke, a former Remain-supporting MP and cabinet minister, suggests Javid’s ouster undermines the chancellor’s ability to ask hard questions about spending. “The credibility of the Treasury also matters internationally,” Gauke tweeted Thursday. “Governance matters to foreign investors. The strength of the Treasury is embodied in the Chancellor.”

It isn’t so much the personnel change but the way it signals the centralizing stranglehold of Cummings and Johnson that suggests fiscal discipline might weaken.

Of course, Sunak — who, until now, has been fiscally hawkish — will want to prove otherwise. And it would be wrong to suggest that chancellors are always right on spending or that they don’t also act politically as opposed to in the interest of sound fiscal policy. Sunak has one handy advantage, though: It will be very hard for Johnson to sack a second chancellor in a row.