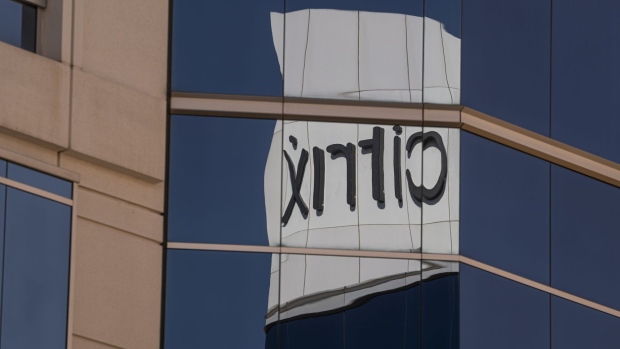 Citrix signage reflected in a window at the comapany's headquarters in Santa Clara, California, U.S., on Wednesday, Jan. 19, 2022. Elliott Investment Management and Vista Equity Partners are in advanced talks to buy software-maker Citrix Systems Inc., according to people familiar with the matter. , Bloomberg

(Bloomberg) -- Banks are rebranding a chunk of their loans, a move that allows them to keep the debt on their balance sheets in order to mop up some of the $80 billion of underwritten debt flooding the public debt markets.

A $15 billion debt financing for tech firm Citrix is one of the latest deals expected to adjust its capital structure, enabling the arranging banks on the deal to cut the amount of loans earmarked for institutional investors. That follows a similar move taken by banks for deals including Inetum, 888’s buyout of William Hill’s international assets, and Wm Morrison Supermarkets.

As the economic outlook has darkened throughout 2022, banks have been unable to sell billions of dollars in leveraged loans underwritten as so-called term loan Bs, a relatively risky type of debt typically sold to institutional investors. In an effort to reduce the amount available, banks are converting a portion into term loan As, a safer category of debt held by the lenders themselves. But market participants are struggling to spot the difference.

“In some cases they are identical to the TLB,” said Ben Thompson, head of EMEA Leveraged Finance Capital Markets at JP Morgan. “In other cases, they could have a slightly shorter tenor or have a bit of amortization to make them more palatable but by and large they will feel, if not exactly the same as a TLB then like a TLB, rather than a TLA.”

Many of these new term loan As are still seven-year, covenant-lite, bullet repayment loans -- the characteristics usually associated with term loan Bs, as opposed to five-year, covenanted, amortizing loans traditionally seen on TLAs.

Despite the rebranding, banks are still on the hook to provide the terms they underwrote the loans on, unless they can renegotiate with the sponsors.

Some will allow banks to adjust the length of the maturity to a so-called 5+1+1, so they look at the outset like a five-year loan, more akin to a term loan A. However, the expectation is that the additional two-years will be at the sponsor’s discretion, as opposed to the banks’. Some might also agree to a small amount of amortization, such as 2.5% to 5% per annum.

Different banks are treating these term loan As differently. While some commercial banks, with the ability to hold paper, are seeing an opportunity to hold on to higher-yielding paper, other lenders will be looking to offload the paper as soon as market conditions improve.

Given reduced liquidity, there will still be some term loan As come to market that are more like the traditional instruments, especially in the case of safer loans to better-rated companies such as a 4 billion euro term loan A for the Orange and Masmovil telecoms deal.

However, these will be reserved for new deals as opposed to the conversion of stagnant term loan Bs.

In the meantime, however, the hope for bankers is that reducing the pool of riskier debt available will make the remaining loans more attractive for investors.

“The loan market is in a tight spot from a liquidity point of view, and the ability to absorb any sort of large size is really challenging,” Thompson said. “The banks are trying not to swamp the market with offerings that are too big to be absorbed.”

The risk of a euro-area recession has reached the highest level since November 2020, according to economists polled by Bloomberg, adding to expectations of low activity across the region’s debt market on Monday.

Asia got global credit markets off to strong start of the week, extending one of the best rallies this year, after an unexpected interest rate cut in China.