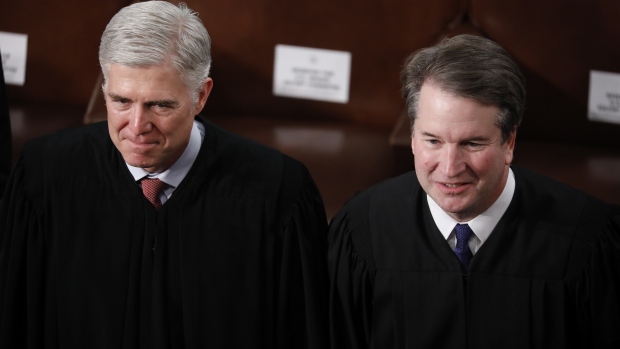 The Supreme Court Justices, from bottom left, Chief Justice John Roberts, Stephen Breyer, and Elena Kagan listen during a State of the Union address to a joint session of Congress at the U.S. Capitol in Washington, D.C., U.S., on Tuesday, Jan. 30, 2018. President Donald Trump sought to connect his presidency to the nation's prosperity in his first State of the Union address, arguing that the U.S. has arrived at a "new American moment" of wealth and opportunity. Photographer: Al Drago/Bloomberg , Bloomberg

(Bloomberg) -- The arrivals of Justices Neil Gorsuch and Brett Kavanaugh to the U.S. Supreme Court stoked liberal fears that bedrock precedents on divisive issues including abortion and federal regulatory power were in danger.

That may still be true. But the term that ended last week showed that the road to fulfilling long-held conservative goals will feature some speed bumps.

In the first term since Kavanaugh succeeded swing vote Anthony Kennedy, conservatives won a major ruling that shielded partisan gerrymanders from constitutional challenges. They also triumphed on property rights and the death penalty.

Those victories were offset by a decision that, for now, stopped the Trump administration from asking about citizenship on the 2020 census. Another ruling preserved some of the power of federal agencies, and the court has refused so far to take up an abortion case.

The court is undoubtedly more conservative with President Donald Trump’s two appointees on the bench. As the nation moves into a long and contentious election season, the court’s move to the right will give Trump fuel to fire up his base and Democrats fodder for making the court a major campaign issue of their own.

But the just-finished term underscores the limits to that shift, or at least to its speed.

“There were major leaps -- for example, blessing partisan gerrymandering in federal court,” said Tom Goldstein, a Washington lawyer who founded scotusblog.com, which tracks the court. “But in other cases, the conservatives were content to just advance the law methodically.”In a term in which 21 rulings were decided by a single vote -- representing almost a third of the docket -- the conservatives formed a 5-4 majority only seven times.

Some of those rulings were big ones, though, particularly the decision last week that said the Constitution doesn’t let judges throw out voting maps for being too partisan. That ruling gave state lawmakers a new license to draw maps aimed at maximizing their own political advantage. It could bolster Republicans in the 2020 elections.

That was one of two decisions that explicitly overturned a precedent. A 1985 ruling had required property owners to press their claims first in state court, a potentially less hospitable forum.

The five conservatives were also in the majority in a 5-4 ruling that let Missouri give a lethal injection to a convicted murderer who said his rare medical condition means he would probably choke on his own blood.

Conservatives got a bigger majority, 7-2, for a ruling that let a 40-foot cross remain as a World War I memorial in a Maryland intersection. Alito’s opinion for the court was narrow, noting that the monument is almost a century old and leaving open the possibility that newer religious displays might be judged differently.

Disagreements among the conservatives tempered their ability to shift the law. Each of the five joined the liberal wing -- Justices Kagan, Ruth Bader Ginsburg, Stephen Breyer and Sonia Sotomayor -- at least once in a 5-4 or 5-3 ruling. The liberals won 10 cases in which they stuck together and were joined by a single conservative justice.

Some of those rulings were narrow, better characterized as fending off conservative victories than pushing the law to the left. The liberals joined with Roberts to reaffirm a 1997 ruling that often requires judges to defer to an agency on the meaning of ambiguous regulations.

That opinion limited the circumstances in which courts should yield to agencies -- so much so that Gorsuch said in dissent that the 1997 precedent had become a “paper tiger” and predicted it would eventually be overturned.

The liberals also aligned with Roberts to put on hold the Trump administration’s effort to add a citizenship question to the decennial census. Although Roberts agreed with the administration and his fellow conservatives on a number of points, he diverged enough to put in the plan in doubt.

Roberts and the liberals said the administration’s explanation for the move was “contrived.” The Commerce Department now has a chance to provide better justification but will be racing the clock. The administration previously said the questionnaire needed to be finalized by June 30.

“This term showed that it is not impossible to secure progressive victories in this court,” said Elizabeth Wydra, president of the progressive Constitutional Accountability Center. “But make no mistake, the Roberts court is deeply conservative and we saw several seeds planted” that she said “could bear fruit for an extreme conservative agenda in terms to come.”

Gorsuch joined the liberals four times, twice in criminal cases. He wrote the majority opinion striking down a provision that increased sentences for some people convicted of carrying a firearm during a violent crime, saying it was unconstitutionally vague.

The ruling drew a sharp dissent from Kavanaugh, who called it a “serious mistake.” He said it “will make it harder to prosecute violent gun crimes in the future.”

Gorsuch has inherited the role of the late Justice Antonin Scalia, whom he succeeded, as the court’s civil libertarian in criminal cases, said Josh Blackman, a constitutional law professor at South Texas College of Law in Houston.

“Like Scalia, Gorsuch’s opinions are not driven by empathy for those who break the law,” Blackman said. “Rather, he is generally skeptical of the federal government’s powers to deprive people of life, liberty and property.”

The firearms case wasn’t the only one that divided the two Trump appointees. Kavanaugh joined the liberals in an antitrust decision forcing Apple Inc. to defend against claims that it artificially inflated prices at its App Store. Gorsuch dissented with his fellow conservatives.

The two Trump appointees agreed 70% of the time, identical to Kavanaugh’s agreement level with Breyer and Kagan, according to statistics compiled by scotusblog.com.

But both “flexed their conservative bona fides” this term, said Leah Litman, a constitutional law professor at the University of Michigan.. They “willingly agreed to overturn several longstanding precedents in areas ranging from constitutional rights to administrative law.”

That left Roberts controlling the court on its most important decisions.

“This is now, truly, the Roberts court,” said Kannon Shanmugam, an appellate lawyer at Paul Weiss in Washington. “While the court’s general direction was not consistent, the chief justice played a pivotal role in the most important decisions.”