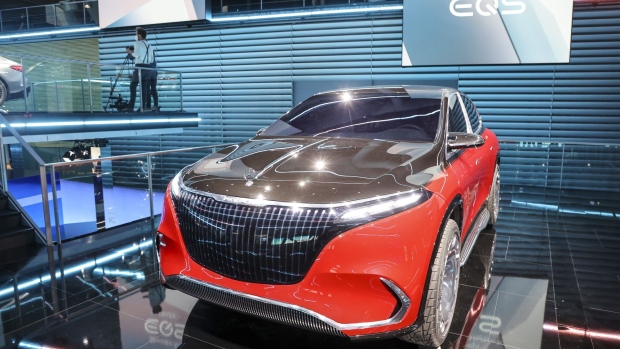 The Mercedes-Maybach EQS on display at an unveiling event ahead of the IAA Munich Motor Show in Germany. Sales of the luxury electric vehicle are expected to start next year. Photographer: Alex Kraus/Bloomberg , Bloomberg

(Bloomberg) -- Maybach has big plans for the maximalist coaches it’s made occasionally for the past 113 years, a line that now includes the Mercedes-Maybach S-Class and Mercedes-Maybach GLS.

There’s the two-tone, 18-foot-long Mercedes-Maybach S680 sedan developed by Virgil Abloh, the late head of menswear for Louis Vuitton, which goes on sale globally later this year with a limited run of 150 units. Also by Abloh, in conjunction with Gorden Wagener, the charismatic chief design officer for Mercedes group: the electric off-road concept called Project Maybach.

Meanwhile, Mercedes-Maybach’s new “Haute Voiture” concept unveiled on May 18 promises bouclé door panels reminiscent of Chanel suits and a launch date next year. An electric Mercedes-Maybach SUV will soon follow. Plus there’s a new business plan at Mercedes-Benz that focuses on higher-end, higher-margin vehicles like those from its Maybach division, which boasts a fresh young chief executive officer just a few months into his tenure.

With all that excitement, Maybach, it seems, could be poised for a resurgence.

“There has been a restart,” Mercedes-Benz CEO Ola Kaellenius says during an interview in Monaco on May 18. “This is the rejuvenation of the Maybach brand.”

Named after Wilhelm Maybach, a prolific engine designer and one of Gottlieb Daimler’s earliest collaborators, and founded with his son Karl in 1909, Maybach grew synonymous at the time with speed, power, and prestige. By 1921, it was making cars like the 5-meter-long Maybach 22/70 HP W3 and the opulent Maybach SW 42, which featured such novelties as electrically operated windows.

After World War II, during which Maybach produced most of the engines for Nazi Germany’s tanks, the company continued making diesel engines, but infighting and disorganization caused it to implode. In 1960, Daimler-Benz AG acquired Maybach Motorenbau GmbH mostly to own the rights to the engines.

In 1997, after decades of dormancy, Mercedes presented a Maybach concept at the Tokyo Motor Show and said it would produce a pair of Maybach-branded sedans within the next five years. The Maybach 52 and the Maybach 62 arrived in 2002, but the cars looked bloated and self-serious, and the brand later admitted it had lost $439,000 on each of the cars it sold. In 2011, Daimler announced it would sell off the remaining models, effectively tranquilizing Maybach for the time being. The signature two-tone saloons entered a long hibernation from relevancy since Jay-Z and Kanye West featured a dismembered 2004 Maybach 57 in the video for their song Otis in 2011.

Then came the latest shift. Mercedes revived the Maybach badge at the 2014 Los Angeles auto show with the new Mercedes-Maybach nameplate, essentially a rebadged version of the Mercedes S600 flagship sedan. These modern Mercedes-Maybach vehicles were designed primarily for chauffeured trips and came cocooned so densely in creature comforts they feel closer to the business suite of a private jet than a car. Fully reclining seats, beverage chillers, retractable work tables, and DJ-caliber headphones for the entertainment system are de rigueur.

Since then, sales have steadily risen. Last year, Mercedes-Maybach sold 15,730 units worldwide, up 50% from 2020 and boosted primarily by China, where its cars sell at a rate of more than 900 a month.

“The brand is doing fantastic,” says Daniel Lescow, the new head of Maybach, during dinner in Monaco on May 17. “There is so much potential. We spend zero media money on it.” While he declined to talk specifically about order rates on the newest Maybach vehicles, he characterized them as “in high demand.”

Maybach says it has a plan to conjure something that will appeal to the world’s moneyed class even if it can’t draw from an esteemed (or, at least, consistent) pedigree. First, it keeps the cars just out of reach.

“The purpose of Maybach is not to churn out new models even every year,” Kaellenius says. “You’ve got to keep it special. Lower volume, discerning customers. Every now and then, we will sprinkle the Maybach manufacturer brand on top of a few [Mercedes] products.”

And then it punches you in the nose. Stylistically speaking, of course.

The Mercedes-Maybach Haute Voiture, so named after a play on haute couture and the French word for “car,” is a prime example. The white faux-fur mats that line its floors are so long and shaggy Penny Lane herself would approve. The rose gold studs lining the arctic white seats and matching Champagne flutes in the rear recall the visual cues of a bridal shower brunch. Intricate stitching across niveous leather seats and Maybach logos festooned across the car scream for attention like a teenager on a sugar high.

“Some people may say it’s terrible, but that is exactly what we should do as a luxury brand—it’s a shock,” says Steffen Köhl, the director of advanced exterior design during an interview at Mercedes’s design studio in Nice, France. “Disruptiveness and contradiction are a source of creativity.”

The shock comes as much from the size and price of the vehicle as it does from all of the extra cosmetic and personalization options available. A Mercedes-Maybach S-Class starts at $185,000—$74,000 more than the regular S-Class. And it’s bigger. Maybach sedans offer a wheelbase 18 centimeters (7.1 inches) longer than that of the standard S-Class.

There’s no question such pizzazz helps ensure the cars appeal to Chinese buyers, who tend to pay for more outré designs and skew far younger in age and far wealthier in pocketbook than do the consumers of Mercedes vehicles. The average age of a Maybach buyer in China is mid-40s, and across the brand it’s largely under 50, which is younger than the average Mercedes buyer.

“The Chinese market is a younger market, which is not bashful about showing its wealth, and the Maybach certainly does that,” Stephenson says. “They tend to have a disproportionate sort of demonstration of wanting to show their wealth—and it’s garish. There are a large number of people there who would order a Maybach with gold wheels on it, if they could, or in all gold plate.”

It’s an attitude that’s spreading, if you ask the folks at Mercedes-Benz. The power to surprise is Maybach’s best chance of grabbing car buyers’ attention—regardless of the locale—they say.