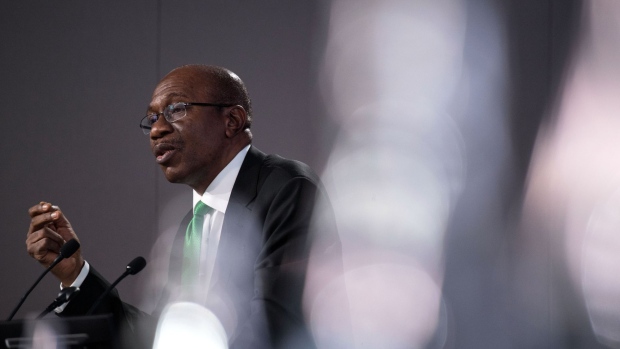 (Bloomberg) -- Nigeria’s central bank will likely leave interest rates unchanged on Tuesday as Governor Godwin Emefiele turns his attention back to the economy after an abortive bid to become president.

The monetary policy committee is expected to keep the benchmark gauge at 11.5%, according to eight of 10 economists surveyed by Bloomberg. Two expect a hike.

The decision comes a day after the nation’s statistics office said economic growth slowed for a third consecutive quarter. Emefiele has said repeatedly that the Central Bank of Nigeria won’t raise rates until it’s satisfied that the economic recovery from a pandemic-induced contraction in 2020 is sustained, even as price growth accelerates. Inflation quickened to an eight-month high of 16.8% in April, staying above the central bank’s target range of 6% to 9% for almost seven years.

Inflation is being driven by high costs and supply side constraints, not strong demand, implying a rate hike is not the right tool to soften inflation, Yvonne Mhango, Renaissance Capital’s head of research for Africa, said by email.

Increased spending to finance political campaigns, rising insecurity in the country’s food-growing regions and soaring diesel prices that have doubled since January will put further upward pressure on inflation this year.

Still, there is a small chance of “token tightening,” said Razia Khan, head of research for Africa and the Middle East at Standard Chartered Bank. The central bank will be constrained by the reluctance to drive domestic debt service costs much higher due to the government’s dependence on it for borrowing.

At the last meeting, of the 10 members in attendance of the 12-member committee, six voted to hold the rate, three preferred a hike of 25 basis points and one favored a 50-basis point increase. Emefiele was one of those who voted to pause citing the need “to foster price stability and output stabilization without introducing disruptive policy shocks.”

The committee that’s been meeting since Monday has two new members, replacing retirees, which brings it to full strength.

Emefiele is chairing his first MPC meeting since abandoning his presidential bid, but that’s unlikely to impact monetary policy, Mosope Arubayi, an economist, said by phone. “He has always been pro-growth, and inflation tolerant, with biases against adjusting the naira exchange rate and raising interest rates,” she said.

Still, Emefiele’s dabbling in politics has created a trust deficit that may constrain his ability to take bold policy steps as it will be easy to read politics into monetary actions, Adedeji Adeniran, director of research at the Centre for the Study of the Economies of Africa, said by email. “I do not think the next president will be comfortable working with a politically-tainted apex bank.”