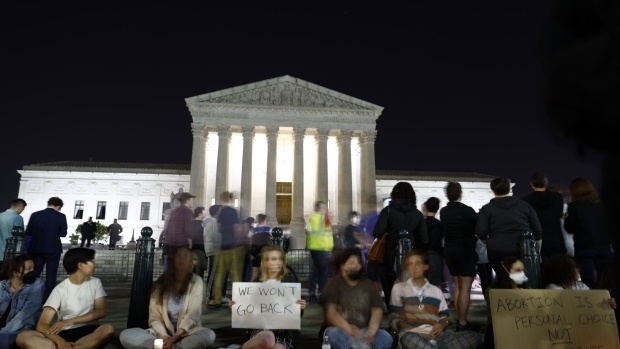 Demonstrators outside the U.S. Supreme Court in Washington, D.C., U.S., early on Tuesday, May 3, 2022. Abortion rights suddenly emerged as an issue that could reshape the battle between Democrats and Republicans for control of Congress, following a report that conservatives on the U.S. Supreme Court were poised to strike down the half-century-old Roe v. Wade precedent. , Bloomberg

(Bloomberg) -- Political donations are poised to surge in key state races where the issue of abortion access will be decided if the half-century-old Roe v. Wade precedent is overturned, according to political operatives and campaign finance experts.

That’s because overturning the 1973 decision, as laid out in a draft Supreme Court decision leaked Monday night, would return to states the power to regulate or ban abortions. Single-issue groups battling over abortion have spent almost $300 million on federal elections over the last two decades according to OpenSecrets, with most of that money backing the side that supports abortion rights.

“You’re going to see money flow into obscure races to move state legislatures one way or the other,” said Dan Eberhart, a major Republican contributor and chief executive of oilfield services company Canary Drilling Services. He said national donors would play an increasing role at the state level, with some races being financed in amounts similar to House races.

The court’s draft decision, first reported by Politico and later confirmed by the court, jolted the political landscape as Democrats seek to defend their narrow U.S. House and Senate majorities. With dozens of states intending to ban or further restrict abortion if Roe is invalidated, the news put a focus on statehouse races.

The DLCC raised an off-year record $21 million, but Williams says that Democrats, who’ve relied on the courts to protect access to abortion, need to do more at the state level.

“The issue of choice has stalled federally,” Williams said.

The committee is building infrastructure to take advantage of the heightened concern. In January, it launched a website called “States to Save Roe,” with information on abortion rights around the country. The DLCC is focusing on a handful of states, including Michigan and New Hampshire, trying to flip the legislatures.

Its already received some large donations from major Democratic donors. Deborah Simon, a philanthropist and daughter of the late Melvin Simon, the billionaire shopping mall and real estate developer, has given $303,000, while Democratic fundraiser Quinn Delaney gave $150,000. Director Steven Spielberg and his wife, actress Kate Capshaw, each gave $50,000.

The Supreme Court said Tuesday that the draft is authentic but not final. Still, Williams says, it served as a wake-up call to Democrats to focus on down-ballot races.

In 16 states, including California, Illinois, New Jersey and New York, there are laws on the books to preserve access to abortion even if Roe is overturned. But there are 26 other states that would ban or restrict the procedure should it be reversed. Currently, almost 40 million women of reproductive age live in states that the Guttmacher Institute, a nonprofit research categorizes as hostile to abortion rights. The institute supports those rights.

“It’s been a rallying cry and a fundraising tool for decades,” said Sheila Krumholz, the executive director of OpenSecrets, “and it undoubtedly be a centerpiece of the 2022 and 2024 campaigns.”