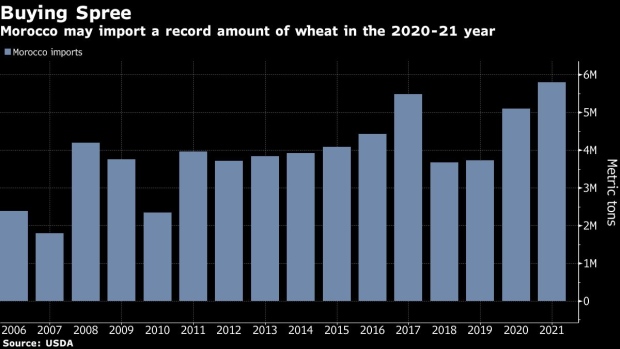 One of the worst droughts in four decades is expected to make North Africa the world’s top buyer of foreign grain.

Scant rain through mid-April dimmed Morocco’s crop prospects this year, with harvests in neighboring nations also suffering. Lackluster local supply may boost the region’s wheat purchases by 7.4% to a record 29.7 million tons in the year from July, the U.S. Department of Agriculture forecasts.

That would put demand ahead of the Middle East and Southeast Asia for the first time in three seasons. While grain tenders have so far been slow, purchases often pick up after local harvests end and suppliers across the Black Sea and Europe collect crops.

“Grain farmers in our area are facing many difficulties,” said Fathi Hamdi, 56, who farms in northwest Tunisia’s Beja governate. He expects the local harvest to be 30% down on the previous year.

Egypt, the world’s top buyer, held its first tender of the 2020-21 season last week. Demand there is more stable than the rest of the region, which has less irrigation and more volatile harvests.

Morocco may buy a record 5.8 million tons of foreign wheat and has already taken the unusual step of exempting import taxes through the end of 2020. That coincided with a push, led by private importers, to double wheat inventories to six months of milling needs by October.

The shortage of rain was as severe as 2016, spurring “critical” harvest prospects, according to the Mediterranean Agricultural Market Information Network.

The economic impact of the coronavirus pandemic is adding to uncertainties around demand. Algeria has vowed to cut food imports as plummeting oil prices crimp export revenues. A lack of tourism is also curbing bread consumption, according to Morocco’s farm-lobby group Comader.

Still, consumer purchases of long-lasting staples such as pasta, flour and couscous had climbed as lockdowns began, and nations may be keen to restock, said Monika Tothova, an economist with the United Nations’ Food & Agriculture Organization. USDA will update its demand outlook on June 11.

“It all depends on how the world market is going to be developing,” Tothova said. “If prices remain not too high, North African countries are likely to be going at it and building the stocks that were depleted by this shopping spree.”