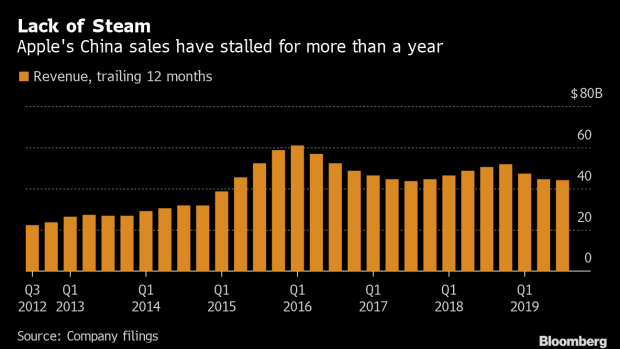 (Bloomberg) -- Apple Inc.’s decision to skip support for the latest wireless standard on its new iPhones may cost the company a chance at capturing China’s biggest smartphone replacement wave in years.

The iPhone maker, which is the only foreign brand to hold a top-five position in China, is struggling to fight off local competitors Huawei Technologies Co., Oppo and Xiaomi, whose slicker designs, more sophisticated cameras and cheaper price tags are wooing customers all over the country. The lack of fifth-generation (5G) cellular support in the newly announced iPhone 11 family won’t immediately be an issue, but it could hurt Apple in mid-2020, when analysts expect China’s smartphone market to rapidly ramp up 5G demand.

It will be “extremely difficult” for Apple to maintain its China position into the second half of next year, according to Jia Mo, an analyst at research firm Canalys. “It remains to be seen if iPhone 11 can offer technology innovations to offset some disadvantages in hardware, like lack of 5G support.”

Apple on Tuesday launched new iPhones with added cameras, upgraded processors, refreshed design, better batteries and faster charging, however there was little in the company’s presentation that surpassed what Android rivals have already been offering. Still, Apple suppliers saw an uptick in their stock prices following the launch, partially driven by Apple’s reduced $699 iPhone 11 starting price.

China is hurrying to be a leader in the 5G era, and state-owned mobile operators have pledged billions of dollars to build the requisite nationwide infrastructure. The new wireless standard -- bringing significantly faster speeds and almost no latency -- is seen as the key to unlocking next-generation tech applications like autonomous driving, remote surgery and ubiquitous streaming of high-definition content. Phone vendors are naturally among the earliest adopters, hoping the faster speeds will spur a mobile market that’s plateaued and started to shrink in recent years.

Few companies have experienced the slowdown in global smartphone demand as severely as Apple, which stopped reporting the number of iPhones sold from the start of this year. The Cupertino, Calif. company is estimated, by researchers IDC and Canalys, to be shedding millions of unit sales each quarter relative to its prior-year performance, and that problem is also manifesting in China, its biggest market after the U.S. That’s despite multiple rounds of price adjustments, according to IDC. The new iPhone 11 starts at 5,499 yuan in China, whereas Oppo and Xiaomi’s current flagships cost around 3,000 yuan, while at the super premium tier Huawei charges 6,300 yuan at most and Apple’s iPhone 11 Pro starts at 8,699.

Huawei’s upcoming flagship Mate 30 Pro will have the company’s Kirin 990 5G processor, which integrates the 5G modem into the main processing chip, saving on space, power and cost. Xiaomi and Oppo are about to introduce their latest 5G phones in China, while Samsung Electronics Co. has already announced its first 5G handset for the country. Vivo, the second-largest phone maker in China, is also scheduled to unveil its 5G flagship next week. Apple’s first 5G-enabled phone, however, won’t be available until next year, Bloomberg News reported earlier.

The major replacement cycle will kick off sometime in the second quarter of 2020, as China’s 5G coverage expands and vendors offer more models, according to James Yan, an analyst with consultancy Counterpoint Research. “That means Apple will miss out on the first six months of the cycle,” he said. “Apple will rely on its strength in software and ecosystem to keep user numbers, instead of hardware.”

Around 90 million 5G phones will be shipped in China in 2020, a steep increase from the 3 million units forecast to be shipped by the end of this year, according to Yan’s research. The companies fastest to capture that market will also be ideally positioned to serve the projected increase in demand that follows. For Apple, which is now also building out a services and subscription ecosystem, every unit sold or not sold gains significance because it’s the gateway to another subscriber.

To contact Bloomberg News staff for this story: Gao Yuan in Beijing at ygao199@bloomberg.net

To contact the editors responsible for this story: Edwin Chan at echan273@bloomberg.net, Vlad Savov, Peter Elstrom