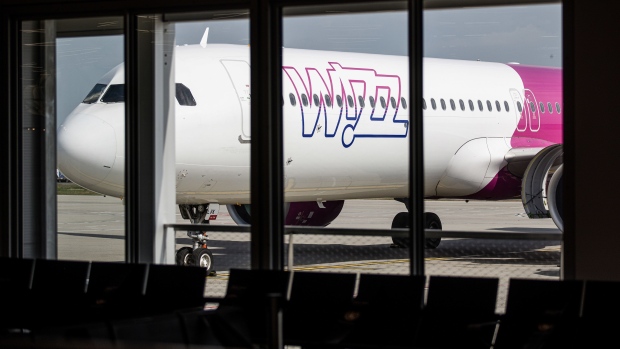 A Wizz Air Holdings Plc passenger aircraft parked at a gate at Budapest Ferenc Liszt International Airport in Budapest, Hungary, on Wednesday, Aug. 4, 2021. The Hungarian government has made a non-binding offer to buy Budapest Airport, according to people familiar with the matter, as Prime Minister Viktor Orban seeks to gain control of what had been one of the fastest growing hubs in the region before the coronavirus pandemic. , Bloomberg

Wizz Air Holdings Plc posted a loss for the three months through December as the omicron variant of Covid-19 took its toll and the carrier spent money ramping up flights.

The discount carrier had an operating loss of 213.6 million euros ($241 million) in the period as renewed travel restrictions triggered by omicron curbed demand, the company said in a statement Wednesday.

Uncertainty over travel is likely to impact bookings into March, the airline said, leading to a higher loss in the fiscal fourth quarter through March. It had previously forecast a 200 million-euro loss for the third quarter that could carry over into early 2022.

Chief Executive Officer Jozsef Varadi said he’s cautiously optimistic that demand will recover through spring, allowing near-full utilization of the Wizz fleet from summer onwards. The U.K. this week said it would remove Covid-19 test requirements for vaccinated travelers, and the EU has said it plans to follow suit.

Wizz is staging an aggressive expansion as it seeks to narrow the gap to low-cost sector leader Ryanair Holdings Plc. While the Budapest-based firm became the first major European carrier to return to pre-Covid capacity in August as demand boomed, it had warned that the winter months would require price cuts to spur sales.

Varadi has also placed a major plane order and bought operating slots at London Gatwick airport to fuel growth, while Wizz was the unidentified bidder that made a takeover offer for British discount rival EasyJet Plc, Bloomberg reported in September.