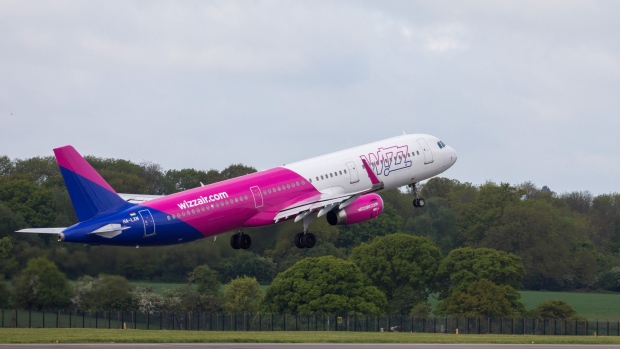 A passenger aircraft, operated by Wizz Air Holdings Plc, takes off as it departs from London Luton Airport in Luton, U.K., on Friday, May 1, 2020.Wizz Air plans to operate 10% of its scheduled flights for passengers with essential journeys from the airport today, the Evening Standard reports, citing the company. Photographer: Chris Ratcliffe/Bloomberg , Bloomberg

(Bloomberg) -- Wizz Air Holdings Plc wants to expand its new base at London’s Gatwick airport from just one plane to 20 within a year if it can secure enough takeoff and landing slots.

While the hub will open with a lone Airbus SE A321 jet in October, Budapest-based Wizz sees scope to quickly expand it to employ 800 people, an operation that would support a further 4,000 jobs, Chief Executive Officer Jozsef Varadi said in an interview.

Wizz is seeking to leverage the European airline industry’s lowest cost base to grab market share in London as the coronavirus crisis pushes other carriers to trim their fleets. Varadi said the plan is being frustrated by the suspension during the pandemic of rules that usually force incumbents to relinquish slots the following year if they fail to use 80% of them.

“If airlines are unable to operate slots they should be returned to a pool so that carriers can access them, bring in revenue and contribute to the local economy,” Varadi said. Wizz is lobbying authorities including regulators in both the U.K. and the European Union to drop the waiver as flying resumes, he said.

The European Commission has said the measure is temporary and aimed at protecting the industry while also removing the need for airlines to fly empty planes just to hang on to flying rights.

While the suspension applies across Europe, it’s a particular issue at Gatwick because British Airways, Virgin Atlantic Airways Ltd. and Norwegian Air Shuttle ASA all have suspended operations there, leaving a large number of slots at the south London facility in limbo, the CEO said. EasyJet Plc, the biggest airline operator at Gatwick, has resumed service at a slower pace than Wizz.

Gatwick is currently operating at only 20% of its year-ago capacity, Varadi said, compared with 70% at Luton airport, Wizz’s original U.K. hub north of London.

The discount carrier, Europe’s third-biggest behind Ryanair Holdings Plc and EasyJet, currently bases 10 planes at Luton with a further 20 flying in from other locations. Gatwick could ultimately support an operation of at least that size, Varadi said.

A higher number of planes would be directly based at Gatwick because the bulk of passengers would be Britons making leisure trips to the continent. That contrasts with Luton, where a majority of passengers are flying in to the U.K. to work, or visit friends and family.

Virgin CEO Shai Weiss has said his company might lease out its Gatwick slots until the long-haul market in which it specializes revives. Varadi previously ruled out such an arrangement, saying the investment required to build up a new market is too great not to have certainty over access.

Wizz sought to establish itself as a force at Gatwick last year, when it was a contender for slots from failed Thomas Cook Group Plc. Those were bought by EasyJet, while positions vacated by Monarch Airlines in 2017 went to BA owner IAG SA after Wizz had bid.