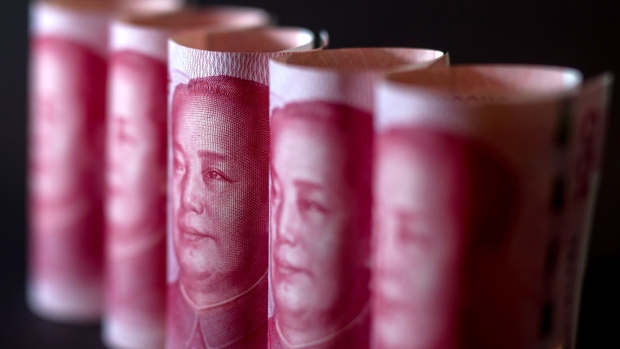 (Bloomberg) -- A top Chinese technology company that’s struggled for months to assure creditors of its financial stability has seen its efforts to secure a fresh loan disrupted by the coronavirus crisis.

With payments on a dollar loan coming due next month, Tsinghua Unigroup Co. has been engaged with lenders on a $900 million financing deal. That loan has been delayed partly due to the coronavirus outbreak and the Lunar New Year holiday, a company spokesman said Tuesday.

Even so, the financing market has been open for others. Developers have been selling dollar bonds in recent days despite property sales having come to a halt due to the shutdown of large parts of China’s economy due to the epidemic. Yuzhou Properties Co. on Thursday amassed more than $3.5 billion in orders for a $400 million note.

Unigroup, which has been at the forefront of Beijing’s campaign to achieve global dominance in technology, saw some of its dollar bonds tumble to two-month lows this week after news of the delay on its loan deal.

It all makes for a challenging start to 2020 after the chip-maker’s rocky 2019. Unigroup’s 2023 dollar bond tumbled in late November on news of plans to extend and amend its loans. The note hit a low of about 60 cents on the dollar in December; Unigroup that month secured a jumbo credit line, raising questions about the company’s cash requirements.

The firm needs to tackle a $1.3 billion offshore debt burden this year, and proceeds from the loan were intended for refinancing. Unigroup also faces as much as 8.3 billion yuan ($1.2 billion) in domestic bond redemptions next month.

More on the company:

Founded in 1988, Unigroup is a business arm of Tsinghua University, which is regarded as one of the nation’s top institutions of higher learning and counts President Xi Jinping as an alumnus.

The company suffered a net loss of 3.2 billion yuan for the first half of 2019. It had 165.6 billion yuan in interest-bearing liabilities as of the end of June, according to its half-year financial report. The group and its subsidiaries also have a combined 54.6 billion yuan of onshore and offshore bonds outstanding, according to data compiled by Bloomberg.

The company’s finances have deteriorated sharply in the last four years after it embarked on a borrowing spree to up-size its global footprint through acquisitions and investments. Its debt-to-asset ratio climbed to about 74% by mid-2019, compared with just over 59% in 2016.

A government push to separate academic institutions from their business ventures raised questions about the company’s future. Concern escalated when Tsinghua Holdings Corp., Unigroup’s parent, failed in attempts to sell its stake -- spurring some bondholders to sell.

Unigroup executives have said the company has received support from the country’s top leadership to maintain its ties to Tsinghua University for now, despite the directive on distance between education and business.

Why does it matter:

Investors are trying to determine which borrowers are on their own when it comes to dealing with their financial problems, and which will get official help. Surprises came last year when some state-owned lenders were allowed to default on their debt. The extent to which official support is forthcoming -- if it should prove needed -- in Unigroup’s case would give creditors further clues on this question.

Another outstanding doubt is how broad and deep the support for companies will be in light of the hit to China’s economy from the coronavirus. While policy makers have mounted liquidity injections into the banking system, allowed regional authorities to sell more debt, and offered fast-track approval on debt refinancing plans, how that all relates to specific corporate borrowers is unclear.

Ultimately, continuing financing troubles at Unigroup could affect confidence in -- if not the actual course of -- China’s technological competitiveness as it races to supersede the U.S.

What does the company say:

“The company has also prepared a backup plan and has sufficient cash on its books” if the $900 million loan is not completed in time, a Unigroup spokesman said, adding that the firm remains in discussion with lenders.

A spokeswoman said in December that the firm was confident of meeting all bond-payment obligations.

What do ratings companies say:

What are traders watching next:

In addition to its repayment obligations both onshore and offshore, investors are also closely monitoring developments regarding any potential changes to Unigroup’s ownership structure as well as its plans on asset sales.

Parent Tsinghua Holdings said in November it will cut its stake in Tus-Holdings Co., another subsidiary, which runs the world’s largest university science park. Investors are looking for clarity on whether that fund-raising exercise was simply designed to comply with the call for universities to disinvest their businesses, or was meant to raise cash in light of Unigroup’s financial woes.

--With assistance from Ina Zhou.

To contact the editors responsible for this story: Richard Frost at rfrost4@bloomberg.net, Christopher Anstey, Shen Hong