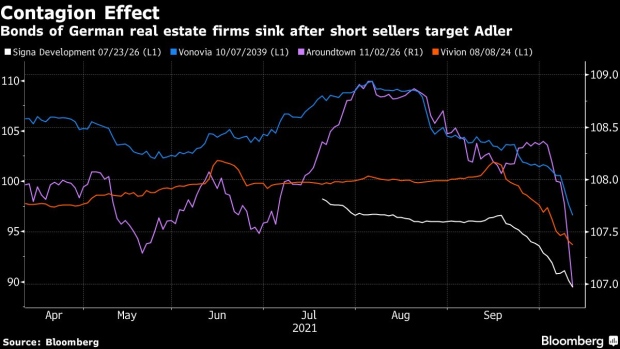 Most notably, the long-dated bonds of Germany’s largest landlord Vonovia SE, which are investment-grade and typically have stable prices, fell below 90 cents for the first time this week, according to data compiled by Bloomberg. The company last week agreed to a deal with Adler’s biggest shareholder Aggregate Holdings to pay off a margin loan and an option on half its stake.

“Vonovia’s longer duration bonds have been a blood bath this week, no one want to touch German real estate now, the level of doubt about this sector is real,” said Benoit Soler a senior portfolio manager at Keren Finance in Paris. “You may also ask why some peers are bidding their asset so quickly and not waiting for a fire sale? By doing this, you protect your own asset value.”

While there’s no indication that Fraser Perring’s Viceroy Research or other short sellers are targeting Adler’s peers, creditors have been reviewing their exposure to the sector nonetheless, one of the most prolific for bond issuance in the last few years. Publicly-traded German landlords have borrowed at a record pace from bond markets to fund the frenzy of buying in a red-hot property market, where prices have boomed since interest rates went to zero.

Aggregate bonds are trading at distressed levels. Those of Corestate Capital Holding SA, a firm co-invested by Aggregate’s owner, and Accentro Real Estate AG, of which Adler has long been a shareholder, fell more than 10 cents in the last three weeks and are now indicated at 85 cents, according to data compiled by Bloomberg.

Notes of companies with no direct interest in the firm are suffering too: