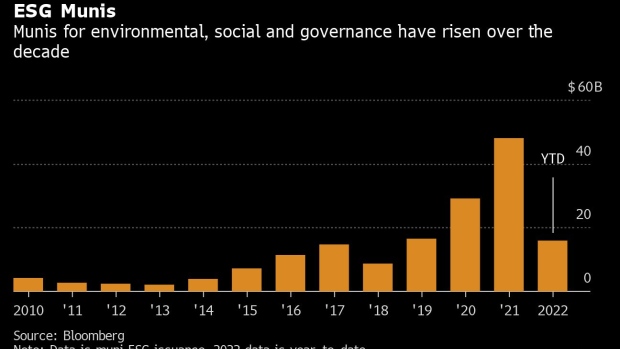 (Bloomberg) -- Republicans’ growing opposition to the ESG movement is targeting a corner of Wall Street less accustomed to controversy -- the credit rating companies.

S&P Global Inc. unveiled a scoring system for governments on categories like human rights, social integration and low-carbon strategies in March. Moody’s Corp. released its own scoring system, and Fitch Ratings Inc. in a May report said environmental, social and governance concerns factor into 7% of their U.S. public finance ratings.

Complaints quickly followed from Republican governors and treasurers, who said the companies have no business wading into an area that lawmakers see as politics, not finance. At stake could be some of the millions of dollars in fees paid by borrowers in the $4 trillion municipal market for ratings required by many institutional investors.

“We are leery of the whole ESG rating system for states,” South Carolina Treasurer Curtis Loftis, whose state received a ‘neutral’ grade in S&P’s new process, said in an interview. “We may be in perfect harmony with their goals and their methods, but they’re not going to order us, like children, to do what they’d like us to do.”

ESG-labeled bonds constitute a small but expanding part of the municipal market. Borrowers sold some $48 billion of such bonds in 2021, about 10% of all issuance and almost quadruple the share from five years earlier, according to Bloomberg data.

While Moody’s Investors Service, S&P Global Ratings and Fitch are the biggest credit assessors, some state officials say their ratings aren’t mandatory. Already, issuers increasingly are opting for a rating from just one of the companies, with single-rated sales totaling 28% of issuance year-to-date, up from 19% in 2008, according to a report from Municipal Market Analytics.

Related: Political Right Zeroes In on ESG Investors as New US Enemy No. 1

“We have the ability to go to companies that stand for the values that we believe in,” Arizona Treasurer Kimberly Yee said in a phone interview. “ESG policies and woke corporations are moving in a direction that I believe is dangerous.”

Yee added, “It’s a political scorecard, and not a financial scorecard.”

It’s relatively rare for municipalities to publicly criticize credit rating companies. In 2017, former Chicago Mayor Rahm Emanuel asked Moody’s to pull its rating on Chicago’s debt, saying that the company failed to recognize the steps he took to shore up the city’s finances.

The rating companies maintain that ESG has long been part of their evaluation process, and the reports are an effort to make the data more transparent. Gregg Lemos-Stein, chief analytical officer at S&P, said the company incorporates ESG factors when it believes they are “relevant and material to creditworthiness.”

The three firms’ approach to ESG differ slightly and comes amid an investor push for such information.

“There is financial materiality to a lot of these factors,” said Lauren Kashmanian, director of portfolio management and responsible investing at Parametric Portfolio Associates, citing the effects of rising sea levels and weather events as examples.

The rating companies themselves argue that issues like climate risk can affect a government’s financial outlook. For example, erosion of waterfronts or the danger of massive fires or social unrest can be costly for cities and states.

Earlier this month, S&P released a follow-up report about its ESG indicators, answering questions such as, “How is ESG relevant to credit ratings?” (S&P’s answer: When it’s material to creditworthiness and sufficiently visible.) “Can ESG credit indicators cause upgrades or downgrades?” (No.)

The dispute is getting heated in Utah, where S&P said Utah’s environmental factors are a moderately negative consideration and the state faces elevated natural capital risk due to long-term challenges regarding water supply.

State officials in April slammed S&P for its scorecard, with Governor Spencer Cox and lawmakers sending the company a letter calling it an undue politicization of the ratings process. State Treasurer Marlo Oaks labeled it “corporate cancel culture,” and asked S&P to rescind the ESG metric.

S&P refused. Eden Perry, head of the firm’s U.S. public finance practice, last week sent Oaks a letter stating the company “will not allow any issuer to inappropriately influence our analytical processes or our credit rating opinions,” according to a copy of the letter obtained by Bloomberg News.

In an interview, Oaks said Perry’s letter didn’t address his concerns, and the shift to more ESG assessments is a way of “weaponizing capital.” Oaks said investors he meets with don’t see any value in ESG analysis, but declined to name any because he said there is fear of being “canceled.”

“ESG will essentially fundamentally change how we do business in the U.S.,” he said.

In fact, regulators including the U.S. Securities and Exchange Commission and the Municipal Securities Rulemaking Board are taking a look at ESG issues in financial markets. The MSRB earlier this year concluded a request for information around ESG disclosure, with some respondents pointing to a lack of clear data from issuers.

“We have heard a lot of investors say, ‘When I see an ESG score, I’m not quite sure what to make of that,’” said Patrick Welch, head of ESG at Kroll Bond Rating Agency, a smaller company.

Welch said Kroll focuses only on factors with a clear tie to the underlying credit’s risk of default. The company called ESG scoring confusing and “a disservice to market participants” in a report published May 12.

While no state officials have said they will stop working with any of the rating companies, they’re keeping their options open. “We’re carefully monitoring who we do business with,” Arizona’s Yee said.