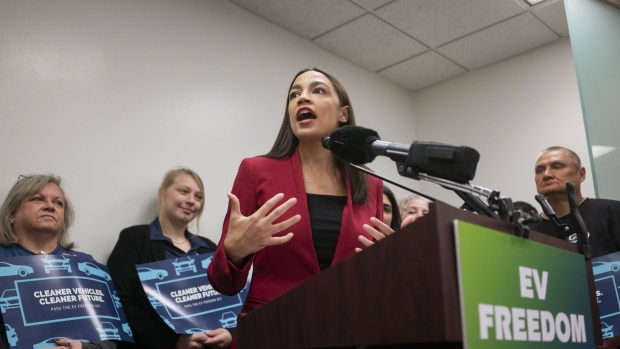 Representative Alexandria Ocasio-Cortez, a Democrat from New York, speaks during a news conference to introduce the EV Freedom Act at the U.S. Capitol in Washington, D.C., U.S., on Thursday, Feb. 6, 2020. The Democratic congresswoman who pushed the Green New Deal to prominence aims to build a national network of high-speed chargers for electric cars under legislation unveiled on Thursday. Tesla Inc. shares surged. Photographer: Alex Edelman/Bloomberg , Bloomberg

(Bloomberg) -- A record number of women are running for Congress this year, boosted in part by a surge of Republican women seeking office in a party struggling to regain lost ground with female voters.

The influx adds to the advances female candidates -- mostly Democrats -- made in the 2018 midterm election that helped reshape the makeup of Congress. It also has echoes in the presidential race, based on voting patterns from two years ago and Democrat Joe Biden’s lead in polls over President Donald Trump among female voters. Biden has vowed to pick a woman as running mate.

“We wondered, would 2018 a be kind of a one-off?” said Debbie Walsh, director of the Center for American Women and Politics at Rutgers University. “In fact what we have seen is the numbers are continuing to grow.”

As of July 1, 574 women had filed to run in primaries for U.S. House seats, topping the record 476 from two years ago, according to data compiled by the center. Another 58 women filed to run for the Senate compared with 53 in 2018. In all, that’s a 20% increase in women making congressional bids.

The figures include 104 incumbents seeking re-election. Among them are lawmakers who quickly rose to national prominence after winning office for the first time in 2018, such as Representative Alexandria Ocasio-Cortez of New York, the youngest woman ever elected to Congress and a star of the progressive wing of the Democratic Party, and Virginia Representative Abigail Spanberger, a former CIA officer who flipped a seat in a district that had long been a Republican stronghold.

Not all of the women who’ve filed to run will make it through primaries to the November ballot -- with about half of the primaries concluded, 196 women have won their races and will move on to the general election.

Fewer still will win office. In 2018, 256 women were on the congressional general election ballot and 116 of them won their races. That was a record, but women still make up less than a quarter of the House and Senate in the current Congress.

Women, as candidates and voters, were key to Democrats retaking the House in 2018, prompting a concerted effort by Republicans to recruit more female candidates. Some 246 women filed as Republicans to run for congressional seats this year, a 73% jump over the 142 who filed two years ago.

“2018 saw the rise of Democrat women,” said Olivia Perez-Cubas, a spokesperson with Winning For Women, a political action committee that supports conservative female candidates. At that point, she said, “a lot of Republican women thought it could be our year next year, and if they can do it, we can do it.”

Trump’s 2016 victory over Hillary Clinton, the first woman to win a major party’s presidential nomination, was a prime motivator for the overwhelmingly Democratic group of women who ran for the first time in 2018.

“The election of 2016 did a lot to inspire the women in 2018,” Walsh said. “There was a sense of losing the potential, for losing ground on a whole host of issues, that I think for a lot of women mattered tremendously.”

The gender gap between the two parties has widened. Clinton led Trump among women in 2016 by 13 percentage points, 54% to 41%, according to network exit polls published by CNN. In 2018 House races, 59% of women cast votes for the Democratic candidate.

In the 2020 contest between Trump and Biden, multiple recent polls show the Democrat leading the president by 21 to 26 percentage points among women.

The 2018 election also brought more diversity to Congress. Candidates such as Ocasio-Cortez argued Congress and the Democratic Party should be more reflective of the voting population. It helped her topple a long-time White incumbent in a diverse district representing parts of the Bronx and Queens.

The killing of George Floyd in May at the hands of Minneapolis police and similar incidents, along with the exaggerated impact of Covid-19 on communities on color, has added urgency to that message.

“We have been let down by so many of our elected officials,” said Adia Winfrey, Democratic candidate for Alabama’s 3rd District, who is Black. “Because we are having these conversations I think people are becoming more aware of their biases.”

Winfrey is among 86 women who are making another run for Congress after coming up short two years ago; after losing a primary in 2018 she ran unopposed this year. She faces long odds in November against long-time incumbent Republican Representative Mike Rogers in a district that Trump won with 65% of the vote, but was encouraged by supporters to try again.

“After thinking about it all summer and most of the fall, I decided that now was the time to jump right back in,” Winfrey said.

Gina Ortiz Jones, the Democratic candidate for Texas’s 23rd District, which includes parts of San Antonio and El Paso and stretches along the U.S. border with Mexico, also emphasizes having a deeper connection with voters.

“There is not enough folks in these leadership positions that have the experiences of the people being represented,” she said.

Ortiz Jones also is making a second try but has a good chance in November. In 2018 she lost the general election to incumbent Republican Will Hurd by just 926 votes. Hurd is retiring; the Republican nominee will emerge from a runoff on Tuesday, and the non-partisan Cook Political Report rates the district as leaning Democratic.

Republican women running for office are also looking to add to the diversity of GOP voices in the Capitol.

“Republican women saw that there is a lack of representation in terms of who they are in Congress,” Perez-Cubas said.

Political newcomer Anne Marie Ward is challenging five-term incumbent Representative Paul Gosar in Arizona’s 4th District primary in August. Gosar is a libertarian-leaning lawmaker who’s been endorsed by Trump. He also has a history of controversial comments and stances.

“I quickly saw we did not have a voice on the Republican side that was reaching to or resonating with the next generation,” Ward said. “We have seen how exhausted America is by the establishment, by career politicians.”

Georgia’s 6th district will see a rematch of the 2018 election between Democrat Lucy McBath and Republican Karen Handel. Handel, who formerly held the seat, lost to McBath and is looking to take it back.

“There has been a real focus to build an infrastructure for conservative women, so they have the tools and the experience to compete and win,” Handel said.

Spanberger, one of the women in the Democratic vanguard in 2018, said she’s looking forward to the day when the number of female candidates won’t be notable because “it will become normal.”

“My ideal is to keep all the wonderful women that we have, and then bring more to Congress,” she said in an interview.