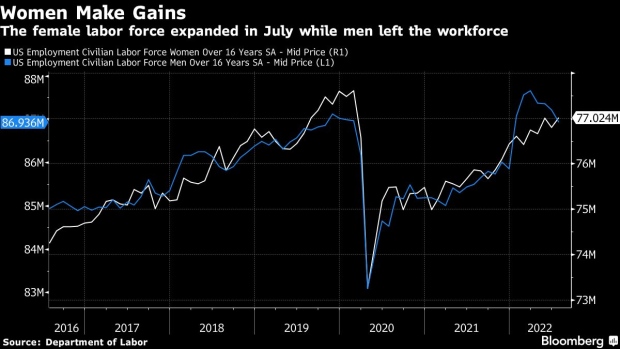 (Bloomberg) -- A sharp increase in female employment drove US payroll gains in July, according to Labor Department data released Friday.

The total number of employed women rose by 327,000 last month, accounting for more than half of the 528,000 increase in overall payrolls. The advances were particularly strong for Latina women -- the number who are working climbed past 12 million, the highest on record -- and White women.

By some measures, America’s female workforce is recovering more quickly than the male equivalent after taking a bigger hit early in the pandemic. Some 55% of women are employed, compared to 55.9% before Covid-19 arrived in early 2020.

The employment rate among men is down by 1.6 percentage points over the same period, at 65.2%, although in July the total number of employed men was higher than before the pandemic for the first time.

Back in April 2020, almost 12 million American women were thrown out of work. Many of the jobs most affected by the pandemic -- the ones that required employees to show up at workplaces, or deal with customers in-person -- were disproportionately staffed by women. Other challenges, including child-care responsibilities, have also made it more difficult for women to return to work.

The overall female labor force, which includes people looking for jobs as well as those who are employed, also grew in July, while among men it shrank for a fourth straight month.