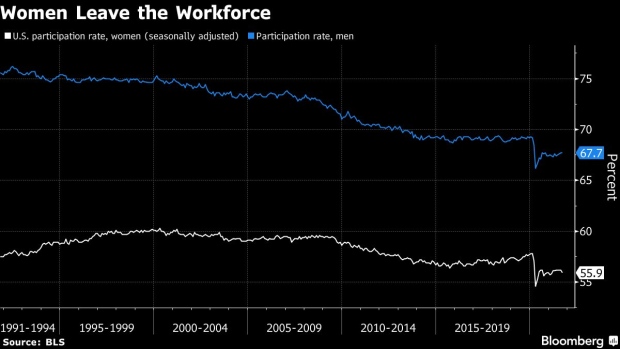 (Bloomberg) -- The decline of the U.S. labor force participation rate last month was driven by women leaving the job market.

The percentage of female workers over 20 who were employed or looking for work dropped to the lowest since February, according to data from the Labor Department.

The reopening of schools was expected to alleviate the child-care burden, which mostly falls on women, and bring female workers back. The data suggest that wasn’t the case.

Adult Black men left the job market as well, the data show, with their participation rate also at the lowest in seven months.

Overall, U.S. job growth in September was the slowest this year, signaling a tempering of the labor market recovery and complicating a potential decision by the Federal Reserve to begin scaling back monetary support before year end.

While health concerns about the coronavirus delta variant likely weighed on hiring in August and September, cases are dropping or poised to start falling in a majority of states, which may bring more Americans back to the labor force in coming months.