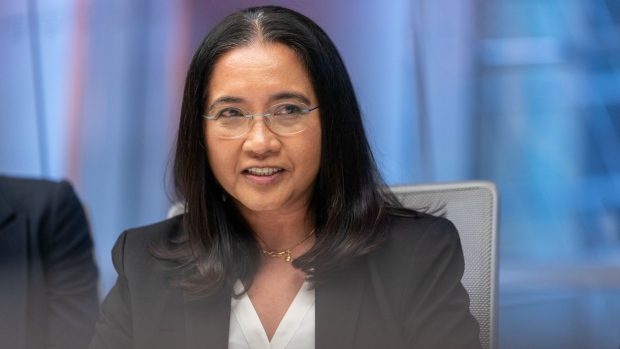 (Bloomberg) -- The $6.5 trillion US ETF industry boomed in 2022 as innovative product debuts and market volatility fueled a near-record number of launches. But the fanfare revealed a major flaw in the space: the lack of women helming the funds.

Just 11% of US fund managers are women, a figure that hasn’t budged in the last decade, according to Morningstar Inc. Fund management teams comprised exclusively of women make up a meager 2% of all equity, fixed income and diversified funds.

Emerge, a Toronto-based independent fund manager with a branch in Buffalo, New York, is striving to improve those figures with one of the first all-woman exchange-traded fund investment teams in the US. In September, the firm launched five US-based ETFs, each overseen by women, which will invest in companies that promote higher environmental, social and governance standards.

Part of the goal is to establish a pipeline for women to make the leap into portfolio management, according to Chief Executive Officer Lisa Langley. While gender pay gaps and a lack of support in managing work-life balance may be notable factors in the lack of women heading ETFs, a key issue is a lack of mentors, she adds.

“We’re not asking for charity. We’re asking for an opportunity,” Langley said in an interview. “There hasn’t been enough of us as a group at the table to say, ‘Hey, it can be done.’”

Still, it’s a difficult time to be launching new funds. Of all ETFs that were introduced in 2022, 67% are underwater. New ESG fund launches in the third quarter dropped 37% from the same period in 2021, and market concentration means that the average size of most sustainable funds is less than $100 million in assets, according to Bloomberg Intelligence.

Bloomberg sat down with the Emerge team — Langley, Cate Faddis, Jane Li, Josephine Jimenez and Catherine Avery — to discuss how they plan to rise within the industry’s male-dominated ranks, what advice they have for women who wish to manage assets and why ESG investing is so vital.

This interview has been edited for brevity and clarity.

Other than the lack of representation of women in this industry, what are some other factors that led to the creation of this team?

LANGLEY: Morningstar was brave enough to put 11% on the number of women portfolio managers. The biggest issue that we have in North America — and I guess I could include other countries in this as well – is the lack of disclosure. You would think if you’re allowed to offer securities to the public, those investment managers would have a requirement to say who’s managing the money under the hood. But there is no such requirement.

AVERY: I thought that women were very much underserved in the investment management industry, and I was starting to struggle with trying to raise assets and getting a little bit tired of hearing, “We like what you do. We like your performance. It’s a great story, but you’re still kind of small.” So when Lisa said that she had a vehicle that could help to raise assets for us and be among other talented women, I said I’m on board.

None of the five ETFs have seen much activity as far as cash flow. How have you prepared for this?

LANGLEY: We have to really pull off a little bit of a miracle, like the miracle of us launching five funds in the US and five funds in Canada. I mean we’re not going to fold up. Everybody here has been through sell-offs, corrections, recessions and catastrophic events. All I want is for these ETFs to get to a point where they can cover their own expenses. I don’t have an issue as a smaller manufacturer running ETFs that can at least pay their own rent.

AVERY: I’d rather start performance at the bottom of the market than at the top, so there’s no place to go but up. When you get to the bottom and you buy stocks low, and if you are a little patient, you’ll eventually see them rise again. If you go with the top and you’re at high valuations, that’s a hard time to really invest, and it’s pretty scary because you don’t know when that next downturn is going to be.

Some on Wall Street have talked about how hard it is to find diverse, qualified talent. Do you agree with that, and what stones are you turning to find those candidates?

LI: I feel like it’s an ongoing process because we’re small. We always put on our job listings that women and people of color are encouraged to apply. The other thing we do is we try to go to recruiters or head-hunters that focus on diverse candidates. It’s not your typical Wall Street recruiter.

I’ve actually had White men, colleagues of mine, who say, “Well, you’re lucky you’re a woman in this industry,” basically implying that I got to where I am because I’m a woman and I’m thinking, “Why don’t you look around at all the portfolio managers in this industry?”

FADDIS: Part of the issue with the investment business is that it’s still very much a cottage industry. This industry has been dominated by a small group of friends and their buddies from the big schools that you’ve all heard of. So how do you find someone? Pick up the phone, “Hey, I need someone; do you know someone?” Well, you know people that look like you. And that gets perpetuated.

What might you say to those who feel that the corporate push for greater diversity is diminishing their own job prospects?

I think that every year it gets easier. I’m also an immigrant — I came from Ghana and I’ve really seen the evolution of America. Even going back to my college reunion, I went to a step show and a woman of the Delta Sigma Theta sorority did her little step and then jumped into the arms of her Korean-American boyfriend. We would’ve just passed out when I was in college.

JIMENEZ: My story is rather different. I was born in the Philippines. I came to this country when I was 16 years old. At that time there were only three of us, but now there are a lot more focused on emerging markets. It never hit my mind that I’m a trailblazer per se. I’m just there doing my work.

How does ESG align with your individual investment goals?

JIMENEZ: In the field of emerging markets, ESG is very important. Particularly as it applies to corporate governance, because we’re dealing with developing countries wherein the rules of the game that exist there are different from what we’re accustomed to in the United States. We look at what the companies are doing with respect to their policies regarding the environment and also the social factors – labor relations and safety at mines.

LI: I just want to add that this whole anti-ESG thing is just bogus because we’ve been doing ESG investing for 25 years before it even became an acronym. It’s just that the industry slapped on factors that all investors should be taking into consideration. Companies have been using governance factors for many, many years, so this whole thing is just ludicrous because it’s an essential part of just evaluating a company on a fundamental basis.

What’s the biggest lesson each of you have learned that you would pass on to an aspiring female portfolio manager?

LI: I don’t know if it’s a woman thing or a cultural thing, but we’re not good at taking credit for our work. You can be much more assertive and proactive.

JIMENEZ: Just work hard and don’t worry too much about whether you are a minority or some other obstacle. It is something that helped me because it can become a self-fulfilling prophecy if you’re so worried about your identity or your race.

AVERY: I was once told that it takes seven to 10 years before you can consider yourself an investment professional in this business. At that time I was a young kid, so I was kind of chuckling at that. But the markets are tough. You really have to be able to take those punches, get off the field, pull yourself back together and get back out there and do what you have to do.

FADDIS: Be patient and be kind. Because it always takes longer than you expect.

LANGLEY: Refuse to compromise. I see young women often back away from the table when the conversation gets tough, especially around money. You can achieve your goals and assume you’re equal — you just have to hold your place at the table.

--With assistance from Isabelle Lee and Kelsey Butler.