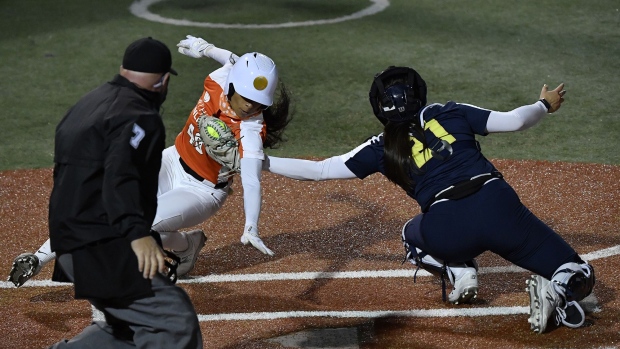 Jazmyn Jackson of Team Warren is tagged out in the seventh inning by Jordan Roberts #41 of Team Osterman during the final weekend of the Athletes Unlimited softball league at Parkway Bank Sports Complex in Rosemont, Illinois in 2020. , Photographer: Quinn Harris/Getty Images

(Bloomberg) -- Athletes Unlimited, a growing network of professional sports leagues for women, is raising funds to expand in its four sports and attract more viewers.

The $30 million round set to be announced Thursday was led by Schusterman Family Investments. Several prominent sports figures are backing the business as well, including NBA star Kevin Durant’s Thirty Five Ventures, Olympic hockey player Angela Ruggiero and David Blitzer, who owns stakes in several teams including the Cleveland Guardians and Philadelphia 76ers.

“Athletes Unlimited, from a business perspective, was based on a premise that there were substantially undervalued athletes and underserved fans,” cofounder Jonathan Soros, the head of private investment firm JS Capital Management LLC, said in an interview. “We’ve set out to very quickly move to a position where we’re filling that need.”

The network launched in 2020 and features professional leagues for indoor volleyball, softball, lacrosse and basketball. Sponsors include Nike Inc. and PepsiCo Inc.’s Gatorade. In April, Athletes Unlimited signed a multiyear deal with Walt Disney Co.’s ESPN for US broadcast rights for softball and lacrosse. There are also TV arrangements abroad.

The leagues have found particular success bringing on star players that garner national attention in their home countries. In volleyball, for instance, games with two-time Olympic gold medalist Sheilla Castro just prior to her retirement performed especially well in her native Brazil.

Players share in the long-term profits of the company and are represented on the board.

“Every pro sports league should take note of what AU is doing, especially the pathway for athletes to have a financial stake in their own leagues,” said Rich Kleiman, who cofounded Thirty Five Ventures with Durant, in a statement.

Athletes Unlimited is considering entering more sports as it seeks out new avenues for growth, but there are no immediate plans in place.

“We continue to debate,” said Soros. “It is absolutely within the framework of the company to add leagues.”

(Updates with role of players in sixth and seventh paragraphs. An earlier version corrected the sports leagues in the deck head.)