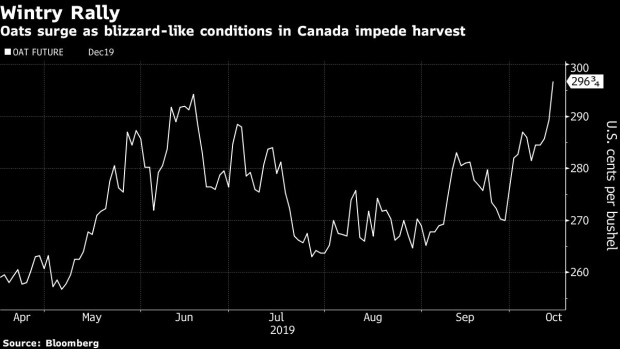 (Bloomberg) -- “Oats know” is an old adage in Chicago grains markets, where moves in thinly traded oats can be a precursor for what may happen in the larger-volume corn and wheat contracts.

What oats may know this week is that bitter winter storms that slammed parts of southern Canada and the northern U.S. have threatened serious damage to grain still standing in the fields.

Oats for December delivery are poised to climb to a record close the contract that debuted about two years ago. Futures rose as much as 3%, the biggest intraday gain in two months.

Blizzard-like conditions last week along the U.S.-Canada border left snowcover of as much as 2 feet (0.6 meter) in parts of the area, with some crops likely being lost as a result. The oats harvest had been delayed in Canada, which was expected to reap about 18% of global production, according to U.S. Department of Agriculture data.

Still, with snow covering fields, it may take weeks before damage is known. That may be why corn and wheat have so far been slow to react -- both crops were little changed in Chicago on Monday.

“It’s going to be a week, if not two weeks, before we know what happened with this winter storm,” Karl Setzer, an analyst at AgriVisor LLC, said by phone. “There’s going to be some crop loss.”