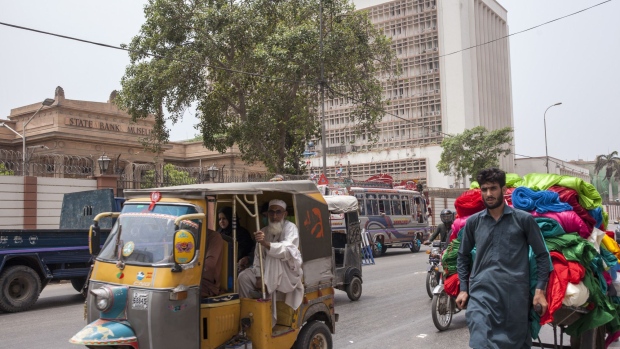 Traffic moves past the State Bank of Pakistan building in Karachi, Pakistan, on Thursday, July 26, 2018. Former cricket star Imran Khan was close to winning an outright majority in Pakistan’s election as his main political rivals complained of vote rigging in a contest already tarnished by violence and allegations of army interference. , Bloomberg

(Bloomberg) -- Pakistan’s central bank asked its employees to work from home two days a week and hold more virtual meetings as the country looks to conserve fuel and ensure it doesn’t run out of dollars.

In a Twitter message Thursday, State Bank of Pakistan told its staff to opt for virtual meetings, car pooling and cutting down on air conditioning. It also suspended purchases of furniture and restricted travel.

“These measures are intended to help with the energy bill while not compromising work,” the authority said. “We encourage the banking industry and other stakeholders to save energy as much as possible.”

Pakistan’s government has already ordered shopping malls and factories to shut early in various cities including Karachi, Lahore, Islamabad and Rawalpindi, and cut the working week by a day. Prime Minister Shehbaz Sharif’s administration has increased pump prices by as much as 83% in less than a month as he tries to curb subsidies and win a bailout from the International Monetary Fund.

The south Asian nation’s energy needs are largely met through imports and in July-May, its total petroleum import bill increased by 99%, according to Pakistan Bureau of Statistics’ data.