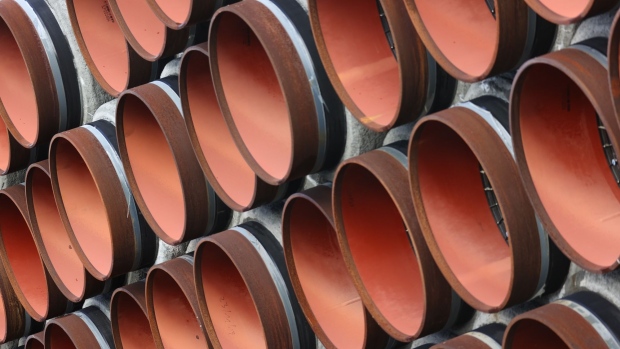 Sections of Nord Stream 2 gas pipeline at the Baltic port of Mukran on the island of Ruegen in Sassnitz, Germany, on Wednesday, Nov. 4, 2020. , Bloomberg

(Bloomberg) -- The companies behind the PennEast natural gas pipeline, a proposed 116-mile (187-kilometer) conduit that would have run through Pennsylvania and New Jersey, halted development on the project after failing to get environmental permits.

Despite a June Supreme Court ruling that gas pipeline projects with federal approval can seize state-owned land, and support from the Federal Energy Regulatory Commission, the project still hasn’t received water quality certification and other wetland permits for the New Jersey section.

The pipeline was planned to carry as much as 1 billion cubic feet of natural gas per day from northern Pennsylvania to New Jersey. PennEast is a joint venture of five companies including Southern Co. and Enbridge Inc.