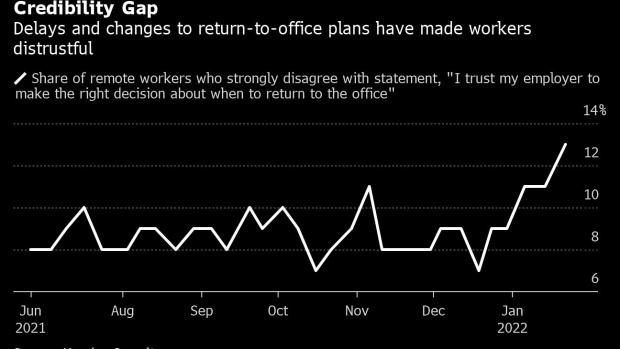 Commuters wait at New York Pennsylvania Station in New York, U.S., on Thursday, Dec. 16, 2021. Amtrak's $12.3 billion plan to build a new commuter-train path under the Hudson River to Manhattan will take more than a decade to complete. In the meantime, it’s working to keep open the current tunnel. Photographer: Gabby Jones/Bloomberg , Bloomberg

(Bloomberg) -- Companies are calling workers back to the office -- again. But after so many fits and starts, employees are losing faith that their managers can get this right.

The share of remote workers who trust their employer to make the right decision on returning to the office hit the lowest point in twelve months, according to a weekly survey by pollster Morning Consult. Just over half of those surveyed agreed, down from about two-thirds who had expressed trust in recent months.

Bank of America Corp., Citigroup Inc. and Credit Suisse Group AG are among the big companies bringing employees back to U.S. offices in the weeks ahead as coronavirus conditions improve. The announcements come just weeks after many firms gave employees more freedom to work from home at the end of 2021 when the omicron variant emerged, creating a whiplash effect. Other employers, like Apple, have postponed their office returns indefinitely. As workplaces gird for a third year of the Covid-19 pandemic, experts say one thing is clear: Making firm plans is a fool’s errand.

“Given many companies have moved, and re-moved, reopening dates, it’s no surprise that remote workers are feeling uneasy about when they’ll eventually be asked back to offices,” said Joanna Piacenza, head of industry intelligence at Morning Consult. “Employers are currently facing a near-impossible balancing act of following through on the reopening timelines they announced back in 2021 while also being mindful of their employees’ comfort levels and health.”

The growing disconnect between employees and bosses goes beyond return to office plans. Nearly three out of four executives believe they’re being “very transparent” with regard to remote working policies, but less than half of employees agree with that, according to a recent survey of more than 10,000 white-collar workers. Cynicism has consequences: Workers who don’t think their managers are leveling with them are more than two times more likely to be looking for a new job, the survey from Future Forum, a research consortium created by Slack Technologies, found.

One reason for the growing distrust could be a lack of communication. For example, 42% of companies last week told Gartner Inc., a workplace consultant and researcher, that they hadn’t communicated anything to employees about the Supreme Court’s Jan. 13 ruling that rejected President Biden’s requirement that large companies implement a vaccine mandate or periodic testing. For Brian Kropp, head of HR research at Gartner, the indecision could stem from two years of pinballing policies that have left both employers and employees exhausted.

“It’s so hard for employers to motivate employees right now,” he said.