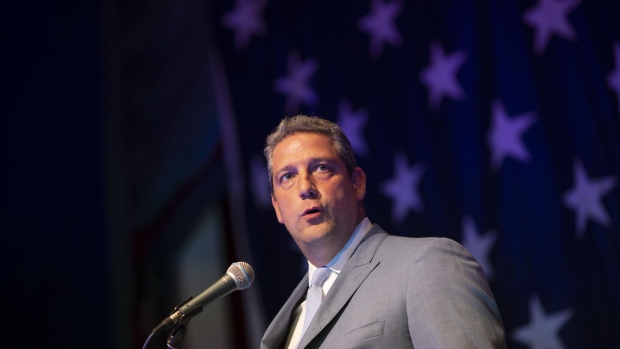 (Bloomberg) -- Workers can lose everything when their employer files for bankruptcy. At least for now.

A pro-labor movement sparked by the employees of Toys “R” Us Inc., and taken up by Sears Holdings Corp., has reached the U.S. Congress.

Representative Tim Ryan, an Ohio Democrat, said he plans to reintroduce 2017 legislation that would define worker claims in bankruptcy as administrative expenses, meaning they’d be paid in full, like the investment bankers, consultants, lawyers and liquidators who earn millions of dollars dismantling dying companies.

It comes after 19 Democrats, including Ryan and presidential candidates Bernie Sanders and Tulsi Gabbard, teamed up in July to demand answers from Toys “R” Us’s owners after its bankruptcy left workers in the lurch. Representative Alexandria Ocasio-Cortez released a video featuring struggling former Toys “R” Us workers on the first Black Friday since their layoffs. And Senator Elizabeth Warren, another 2020 candidate, publicly challenged former Sears Chairman Eddie Lampert’s “commitment to the company’s employees” in a January letter.

Ryan said the stories of workers whose finances were devastated during the 35-day government shutdown, which ended Jan. 25, highlighted the need for such measures.

“It laid bare that workers who are perceived to have pretty solid jobs could not miss one paycheck,” Ryan said in an interview. “They were at the food pantries.”

The bill would prioritize pension claims for fired workers when their companies go under. It joins legislation to hike taxes on the wealthiest Americans, provide wage and leave guarantees and restrict corporate share buybacks.

Though the bill is a longshot to become law because it would have to pass the Republican Senate, it could lead to legislation on the state level that would complicate the bankruptcy process.

Labor’s drive to be recognized as a full partner in the U.S. economy, boosted by a low jobless rate, was given a jolt by the Toys “R” Us workers. They pressured KKR & Co. and Bain Capital, the retailer’s private equity owners, to create a $20 million hardship fund in November for workers such as clerks, cashiers and warehouse staff hurt by the retailer’s liquidation. And after Sears filed for bankruptcy in October, it was Lampert’s vow to save about 40,000 jobs that helped him win a bid last month to keep the retailer in business.

The $20 million may not seem like an overwhelming figure, but it was unprecedented. Suddenly workers are asserting themselves.

Teachers in California, West Virginia, Oklahoma and Arizona have won pay raises after walking off the job. Teachers in other states, including Colorado, Kentucky and North Carolina, have also demonstrated for higher wages and better working conditions.

Air-traffic controllers calling in sick on the East Coast led to a halt in flights to New York City’s La Guardia Airport, while union leaders warned of added risk to airline customers. That put pressure on President Donald Trump to end the government shutdown.

Twenty states, including California, Illinois, New Jersey and New York, raised their minimum wages for 2019, according to the Economic Policy Institute. The hikes range from just a few cents, to adjust for inflation, to $2 an hour in New York City.

But as American workers suddenly enjoy more visibility than they had just a few months ago, U.S. bankruptcy law lumps employees with other creditors whose claims are lower priority. In the beleaguered retail industry, that’s left tens of thousands without recourse.

“Our country’s bankruptcy laws are broken,” said Lily Wang, deputy director of United For Respect, a workers’ rights group. “Employees are fighting for their lives in a system that’s rigged against working families.”

Joseph McCartin of Georgetown University said a confluence of two larger stories -- growing job insecurity and widening inequality -- is focusing attention on employee welfare in a way that recalls the formation of the U.S. labor movement, when one of the goals was to ensure that workers were paid first when companies went bankrupt.

These themes played out in the case of Toys “R’’ Us, said McCartin, executive director of the university’s Kalmanovitz Initiative for Labor and the Working Poor. After the retailer liquidated, with more than 30,000 jobs lost, employees organized.

The severance request was unusual, and was quickly dismissed in Wall Street circles. Then it succeeded. After months of talks, KKR and Bain created the hardship fund.

As KKR and Bain pointed out, they weren’t required to do anything. The pension and severance payments accrued over the years by workers are generally classified as unsecured claims, meaning they’re not paid out before priority claims, such as those for administrative costs. That’s led to efforts like Ryan’s to reconsider which groups get the first payments.

The Toys “R” Us case influenced the subsequent Sears bankruptcy. As the company collapsed, workers at Sears and its sister retail chain, Kmart, asked stakeholders to prioritize job security, severance and pensions as they determined Sears’s future.

Sears workers emulated their Toys “R’’ Us counterparts, said former Kmart employee Sheila Sheneman. “I think the unity among the workers is helping them get noticed more,” she said.

Lampert and Sears struck a deal for hundreds of stores to stay in business after Bankruptcy Judge Robert Drain expressed his concern for worker welfare.

“It would be a very good thing if the debtors could reorganize in a way that would save all or substantially all of the remaining jobs of the workforce,” Drain said at the time.

Last month, the 400-store gift-shop chain Things Remembered Inc. filed for bankruptcy with a plan to close most of its outlets, sell the rest and give its hourly employees a raise if they stuck around to help. KKR is part owner.

“It shifts value from one class to another and it makes it harder to confirm a plan” that would allow a company to exit bankruptcy, he said.

Ryan said there needs to be a broader reevaluation of workers’ roles amid a technological revolution that’s upending the global economy.

To contact the editors responsible for this story: Rick Green at rgreen18@bloomberg.net, Bob Ivry