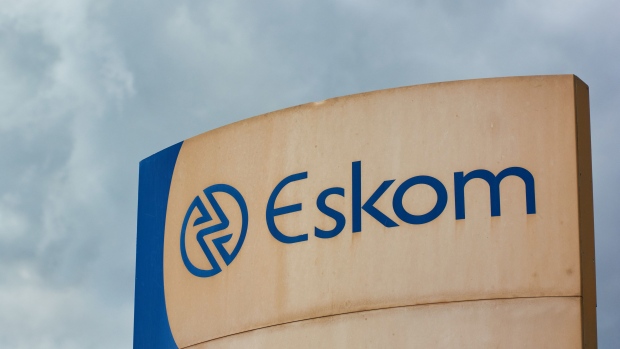 A sign outside the Eskom Holdings SOC Ltd. Medupi coal-fired power station in Lephalale, South Africa, on Thursday, May 19, 2022. South Africa’s Eskom is increasing power cuts to prevent a total collapse of the grid as issues grow from lack of imports to breakdowns at its coal-fired plants. Photographer: Waldo Swiegers/Bloomberg , Bloomberg

(Bloomberg) -- Labor unions at Eskom Holdings SOC Ltd. agreed to call workers back from strike action but not before petrol bombs were thrown at houses of senior officials of South Africa’s beleaguered power utility.

The protest ground many of Eskom’s coal plants to a halt and prompted the utility to deepen power cuts to the worst level since 2019. The so-called stage 6 load shedding spurred Public Enterprises Minister Pravin Gordhan, who oversees the company, to brief the media where he showed photos of the violent attacks.

“These actions, in a democracy like South Africa, is totally unacceptable,” Gordhan said at the briefing from Eskom’s control center. “Whether or not this is because of wage negotiations, or for some other reasons.”

Pay talks were abandoned on June 22. Eskom earlier this month said it offered annual increases of as much as 5.3% in the last negotiating round. The unions wanted a 12% increase across the board.

The unions on Tuesday said that talks with Eskom “have been able to break new ground with a new offer,” which will be presented on Friday.