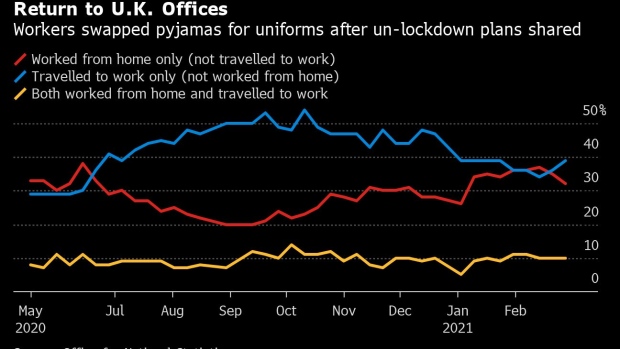 (Bloomberg) -- Most companies in the U.K. will ask employees to return to the office after the pandemic because working from home hurts productivity, a Bank of England policy maker said.

Jonathan Haskel, a member of the central bank’s monetary policy committee, said information and communications technology is the only industry that indicating that staff can get more done from home. He analyzed data from an Office for National Statistics survey.

“A net balance of firms across the vast majority of industries does not intend to use home working as a permanent feature,” Haskel said in a webinar on Friday. “It’s likely that the majority of industries will return to the workplace when the pandemic restrictions are lifted, lessening the impact of structural change from this quarter.”

The remarks help explain why more people are traveling to work during the U.K.’s third national lockdown. Almost half of people reported leaving home for jobs at least once this week, reducing the portion of home working over the past few weeks. The number of people in offices now is similar to what it was in June when pandemic rules were looser.

Prime Minister Boris Johnson plans to slowly loosen restrictions through the middle of the year, starting with reopening schools on March 8. He’s urged people to stick to the rules until the rules are loosened.

A separate report found 41% of people over 80 who had one dose of the vaccine met someone outside their household or support bubble, underscoring the difficulty of maintaining support for the restrictions.

BOE Chief Economist Andy Haldane said in October that working from home was damaging Britain’s creative potential. A hybrid of remote and office working was best for productivity, in his view.

The ONS’s most recent survey results were based on a survey of 6,028 people aged 16 and older between Feb. 24 and Feb. 28. Haskel cited data going back to September.

The statistics office said two-in-five businesses were furloughing staff in January, with 4.9 million people or 16.1% of the workforce in the program that pays 80% of wages to those whose workplace has closed due to the virus. London had the highest share workers on furlough than any other region.

A report on Thursday showed nationwide motor vehicle traffic rose 3 percentage points on March 1 compared with the previous week and is now at 73% of the level seen in the first week of February 2020.