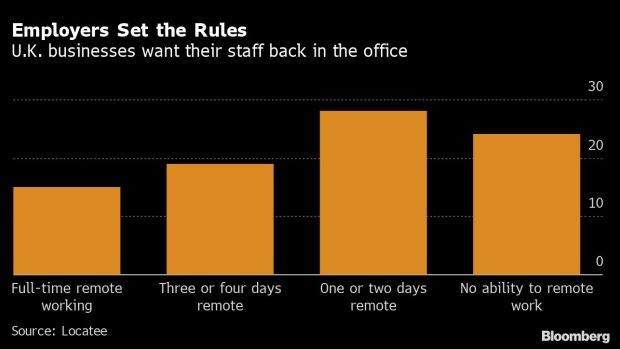 (Bloomberg) -- Britain’s public finances could take a hit from the a permanent shift toward working from home, the government’s independent budget watchdog said.

“Our feeling is that it will be somewhat less government-revenue rich than office working,” said Andy King, a member of the Office for Budget Responsibility, said at a Parliament hearing in London on Wednesday. “If you think about spending less on commuting, cafes and restaurants and spending more on heating homes or buying fans during the summer, or spending more on your supermarket shop -- all of those things reduce the amount of government revenue per pound of activity.”

The remarks are among the first to give an official assessment of how a shift in working culture will affect the economy. While the U.K. lifted many of the remaining pandemic restrictions earlier this week, 16 months of lockdowns have fueled resistance among many employees toward returning to office.

Property prices outside urban areas have surged in recent months, reflecting a growing expectation that more people can work remotely indefinitely. The OBR hasn’t yet made an assessment of those change.

“It looks like there will be a lasting change in the way work is organized,” said Charles Bean, another member of the OBR and a former chief economist for the Bank of England. “There is survey evidence available now for both for the U.K. and the U.S., which suggests that something like 70% of people would like to be working two or more days a week from home.”

One big impact will be on public transport, with a likely reduction in the number of people commuting each day upending forecasts for increasing road and rail traffic. Bean said there’s a broader question of whether people will be more productive at home and also what the trend does to the cost of residential and commercial property prices.

“You can see the relative value of offices falling and that hitting business rates,” King said. “In theory, what you lose in one area you should gain in another. There’s obviously stamp duty on the commercial property market as well.”