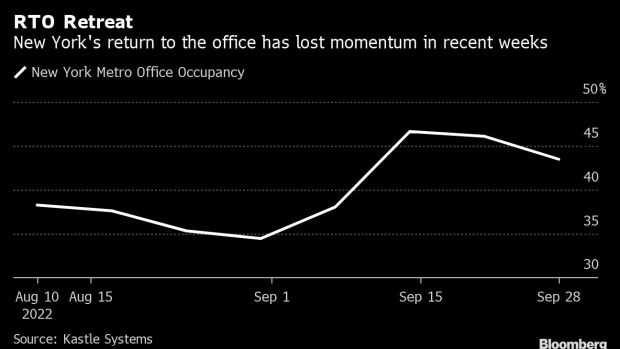 Workers in an office in the Midtown neighborhood of New York, U.S., on Tuesday, Jan. 4, 2022. Wall Street’s push to refill office towers across the country has been derailed again. This time it’s the highly transmissible omicron variant of the Covid-19 virus that’s forced executives to rethink their plans. Photographer: Amir Hamja/Bloomberg , Bloomberg

(Bloomberg) -- America’s return to the office remained in limbo last week as occupancy across big cities was little changed, while New York City’s push to get workers back got sidetracked by religious holidays.

Average office occupancy in ten US cities for the week ending Sept. 28 declined slightly from 47.3% to 47.2% the previous week, according to card-swipe data from security company Kastle Systems. Half of the cities Kastle tracked showed declines over the period, in particular the New York metro area, where just 43.5% of workers showed up, down from 46.1% the week earlier. The Big Apple’s results were likely skewed by the Jewish holiday of Rosh Hashanah, which closed the city’s schools for two days last week.

It was the second straight week where nationwide office occupancy barely budged, after shooting up right after Labor Day.

Even allowing for the holiday’s impact, the grand migration back to offices after Labor Day that many CEOs and civic leaders envisioned hasn’t materialized. Flexibility to work where and when they want has become a non-negotiable aspect of many white-collar staffers’ lives, and while hiring has slowed in certain sectors like technology and construction, the labor market is still tight enough for skilled workers to maintain leverage. US job openings fell in August to lowest in more than a year, suggesting labor demand -- while still robust -- is moderating.

The stickiness of flexible work arrangements could reduce the value of New York’s office buildings by about $50 billion, according to a new study from the National Bureau of Economic Research.

Companies are experimenting with a variety of hybrid-work setups, while others, like Cisco Systems Inc., are even testing four-day workweeks. Results vary so far, but one thing is clear: When companies compel workers to return without involving them in the so-called RTO plan, there’s invariably pushback. Take General Motors Co., which last week retreated from a plan to require employees to return to a company office several days a week, delaying any changes until next year. Return-to-office mandates at Apple Inc. and other big employers have also faced resistance in recent months.

“Employers who say people should get back to the office are operating through a dated lens,” said Leagh Turner, co-chief executive officer at Ceridian HCM Holding Inc., which provides workforce-management software. “I don’t think that is how the world will work ever again.”