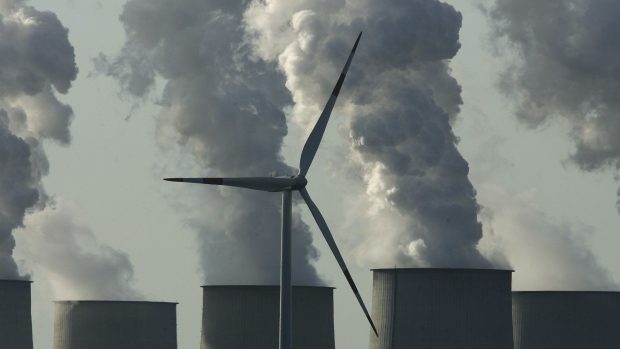 COTTBUS, GERMANY - APRIL 12: A loan wind turbine spins as exhaust plumes from cooling towers at the Jaenschwalde lignite coal-fired power station, which is owned by Vatenfall, April 12, 2007 at Jaenschwalde, Germany. Germany is planning the construction of 40 new coal-fired power plants, though officials claim the plants are based on technology that radically increases their efficiency. The Jaenschwalde power plant, built by the former East German government in the 1980s, emits 25 million tons of CO2 annually and is among the biggest single producers of CO2 emissions in Europe. (Photo by Sean Gallup/Getty Images) , Photographer: Sean Gallup/Getty Images Europe

(Bloomberg) -- The world needs to cut greenhouse gas emissions by at least a quarter this decade to achieve the Paris Agreement’s goal of carbon neutrality by 2050, and the cost will be lower if nations act sooner, according to International Monetary Fund economists.

Work toward the goal will entail short-term costs, IMF researchers wrote in a blog post published Wednesday. The longer countries wait to make the transition, the larger the costs will be, they said.

“If the right measures are implemented immediately and phased in over the next eight years, the costs will be small,” Benjamin Carton and Jean-Marc Natal wrote in the blog accompanying Chapter 3 of the fund’s World Economic Outlook ahead of annual meetings in Washington next week. “However, if the transition to renewables is delayed, the costs will be much greater.”

The team’s model splits countries into four regions -- China, the euro area, the US and the rest of the world. It assumes that each region introduces budget neutral policies that include greenhouse gas taxes, which are increased gradually to achieve a 25% reduction in emissions by 2030, combined with transfers to households, subsidies for low-emitting technologies, and labor tax cuts.

For Europe, the US, and China, the costs will likely be lower than for fossil-fuel exporters and energy-intensive emerging market economies, the pair said.

“That means countries must cooperate more on finance and technology needed to reduce costs — and share more of the required know-how — especially when it comes to low income countries,” they wrote. “In all cases, however, policymakers should consider potential longterm output losses from unchecked climate change, which could be orders of magnitude larger according to some estimates.”

“When policies are gradual and credible, the output-inflation trade-off is small,” but delaying the transition to a low-emission economy would significantly increase the cost to gross domestic product, they said.